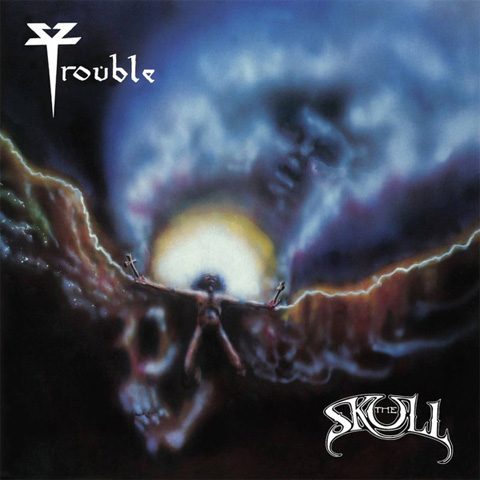 Having set back the cause of heavy metal a good 15 years (in the best possible sense) with their fine debut, Psalm 9, one would have expected to witness some kind of evolution or growth from retro-metalheads Trouble, on their ensuing releases. But thankfully for the cause of doom, 1985’s The Skull confounded any such expectations and progressed not a single iota beyond its predecessor’s imposing, Sabbath-inspired power chords, gritty, analog authenticity, and, unique to Trouble’s template, pro-religion lyrical themes. Unfortunately, its songs weren’t quite up to the same standards from start to finish, and after a semi-decent start via the lumbering majesty of “Pray for the Dead,” The Skull reached something of a premature climax with the surprisingly energetic “Fear No Evil,” containing an awesome array of start-stop riffs, stellar soloing, positive messages, and a memorable chorus that made it one of the band’s most accomplished compositions to date. Next offering, “The Wish,” was Trouble’s first (and last) attempt at epic songwriting, taking a severe stylistic detour toward medieval acoustic guitars, backed with string orchestrations, and followed by extended doomy chords. But its eleven-plus minutes ultimately tried one’s patience before finally giving way to the more typically economical yet somewhat awkwardly rendered “Truth Is — What Is.” Luckily, the brilliantly gloomy harmonies of “Wickedness of Man” quickly helped restore listener’s faith, and “Gideon’s” unfailingly driving attack carried the band’s momentum into the closing title track’s well-rounded smorgasbord of doom. In essence, it’s fair to say that The Skull felt a little less fresh than did its predecessor when it came to letting fans relive the glory of metal’s past, but it still qualified as an American doom landmark, by most every other definition.

“Let all bitterness and wrath and anger and clamor and slander be put away from you, with all malice, and be kind to one another, tenderhearted forgiving one another, as God in Christ forgave you” – Ephesians 4:31-32