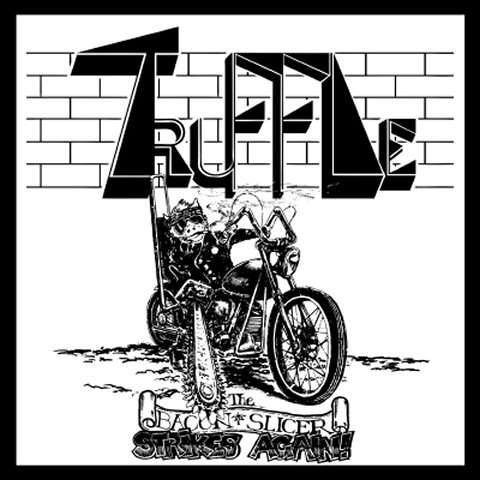 The Bacon Slicer Strikes Again is the third (and final) album in the re-release campaign of Truffle’s back catalogue of high-quality demo recordings. The Bacon Slicer Strikes Again became kind of a catch phrase for Truffle (and their fans), the origin being a composition called The Bacon Slicer. Drummer Pete Patterson takes over: “We used to play a lot of bike rallys/meetings around the country and the pig/hog caricature came from the motorbikes (Harley Davidson) and that’s the ‘Bacon’ part. The chainsaw was the ‘Slicer’ part and everyone just shortened the name from ‘The Bacon Slicer Strikes Again’ to ‘Bacon Slicer’.“ The band also put out t-shirts with the mentioned caricature on it: “We used the cartoon pig and put it on the motorbike, which was a newer version of the motorbike we had on the single ‘Round Tower’/’If you really want’. It was drawn for us by a good friend of ours: Karl Rudziak. We used the motorbike on all our merchandising before ‘The Bacon Slicer Strikes Again’ and then with the pig/hog caricature on the motorbike after ‘Bacon Slicer’ came out.” “The Bacon Slicer Strikes Again” was originally put out as a cassette album in 1985. It was recorded on the No Fixed Abode mobile recording van: “Our guitarist/keyboard player at the time, Greg Watkins, ran his own mobile recording studio (N.F.A. Mobile) and he recorded the ‘Bacon Slicer’ sessions. We hired a rehearsal hall, set up the gear and spent three days recording the tunes. Then Greg mixed them over the following few weeks.” This is how the band later on distributed the tape: “We just sold the album at gigs. The internet wasn’t around then, so that wasn’t an option. We were travelling all over the country and doing lots of gigs at the time … our most was nearly 250 gigs in one year! So selling them at gigs was the best option. We only made 300 copies at the start, although we did copy several more over the next few years when the first 300 were all sold!” Putting out the album on vinyl wasn’t an option back then down to financial reasons: “We would have loved to and we did look at it but the costs were too much for us in those days. All the money we were earning from gigs went back into the running of the band and replacing/buying equipment etc. We also had a 7.5 ton truck which we partitioned and kitted half out with bunks, a heater, a sink plus windows. That took up a lot of running costs as did fuel travelling around a lot. Cassettes were also easy enough to copy once the recording was done!”
However, with a bit of luck Truffle might even have landed a proper record deal: “We came close with Atlantic Records early in the 1980’s. Also, an A&R man from RCA Records came to see us at a gig once but only announced himself after we had finished! Unfortunately, we didn’t play very well and it wasn’t a very good gig. They signed Diamond Head a few months later. Looking back, that could have been us!”