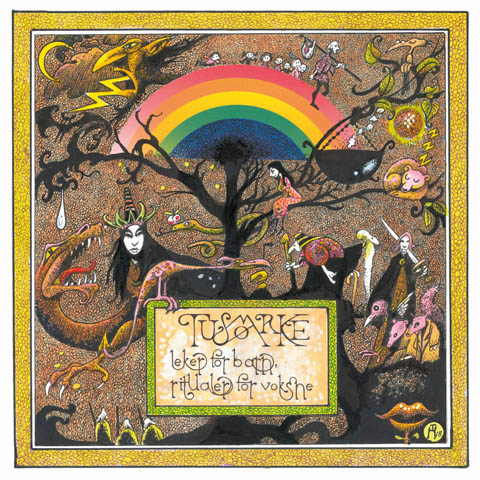 Black vinyl with gatefold cover and a 16-page booklet – which may, or may not, explain the plot.

The collegium of dashing adventurers and explorers of the unknown reaches of history, known to the unwashed masses under the pseudonym Tusmorke, have yet again brought fresh fever from the stars. With no small risk to their very lives, they have investigated the Mesopotamian idolatry that hid beneath what we, in our innocence, thought were simple songs and verses concerned with harmless folklore and creatures of fantasy. Concealed by a veil of ignorance, these ritualistic rhymes and summoning songs show themselves as portals to blissful and terrible realms. Astral worlds and delirious peaks tread forth from the inner places of mankind, and thus exert their power over the reality we share in our waking hours. Our rhymes, riddles and games for children contain ancient elements. Could one find traces of past religious rituals in them? Seemingly innocent texts gain a more foreboding aspect when viewed in light of the human sacrifices, spiritual journeys and ecstatic trance rituals of Europe in times past. Cultural traits that are today associated with exotic voodoo rituals, Buddhism or cannibalistic head hunters of New Guinea were once widespread among our Celtic and Germanic tribes. This album is based on two musicals for children, The Bridge To The Other Side and The Root Of All Evil, which partly consists of Tusmorke’s take on traditional Norwegian children songs, and partly of new compositions. Not everyone who took part in the plays completely understood what they were doing. Not everyone in the audience, either.