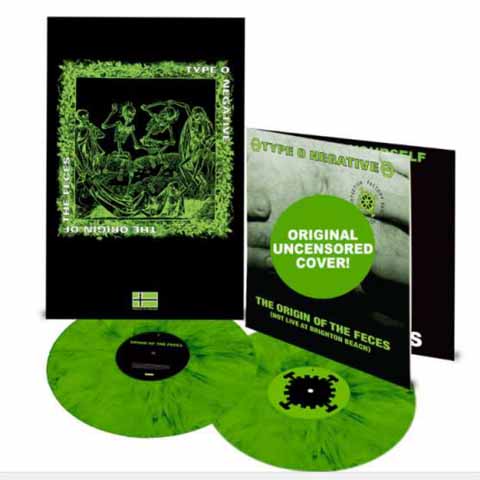 2022 re-issue with the original cover of Pete Steeles anus. This cover were banned and then the album was re-release with a different cover artwork. Type O Negative has always had a strange and twisted sense of humour. Nowhere is this more obvious than on this album. They have given us some strange liner notes at times, but this album really is the go-to point if you want to tell someone how weird this band is. Now, the craziest part about this album is that it is supposed to be a live album. I say supposed to be because the band’s label Roadrunner had it written in the contract that Type O Negative was to record a live album. However, the band allegedly took the money they were supposed to spend on producing the live album on cheap vodka instead. Realizing they needed to fulfil their contractual obligations, the band simply re-recorded their debut album Slow Deep And Hard, added a couple of songs and re-titled some of the other songs and then added fake crowd noise. But they did not stop there. It would be too easy to simply add in crowd noise. No, Type O Negative added in chants of ‘You Suck!’ and improvised a fight between Steele and the fans with Steele yelling ‘You suck too’ at one point in the album and then making fun of the crowd because he’s getting paid to play and the crowd had to pay to get in. At about the midway point, the band claimed it had to stop playing because there was a bomb threat in the concert hall. After a few seconds of silence, they began playing again. Beyond the insanity of the fake crowd, the music is very impressive and it does sound as if they are playing live. The musicianship is tight and is held together well despite the often changing tempos. The track ‘Hey Pete’ is a rearranging of the Jimi Hendrix song ‘Hey Joe’ about a jealous lover ready to kill his cheating girlfriend. Here Peter Steele replaces the gun with an axe. Overall, this is a very fun listen. The humour involved keeps things light and interesting, despite the very dark subject matter. Type O Negative never did record a real live album.