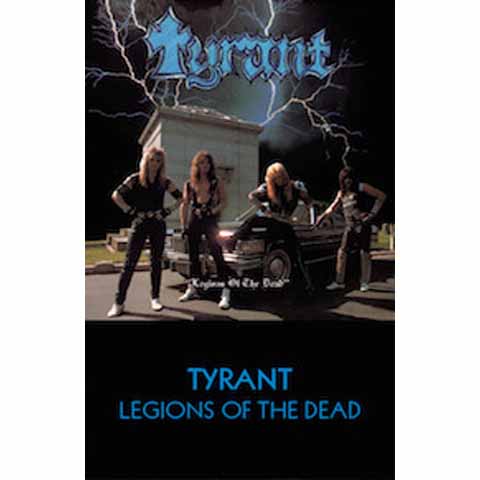 Tyrant ‎–Legions Of The Dead MC

Tyrant’s 1985 debut album, Legions Of The Dead, followed the band’s appearance on the Metal Massacre, Vol. 3 collection two years prior, where their song “Armageddon” (re-recorded here with the expanded title of “The Battle Of Armageddon”) sat side by side with contributions by rising underground metal bands like Bitch, Agent Steel, and Znowhite, as well as future metal legends Slayer! Unfortunately, Tyrant’s overall career achievements would never compare with any of these acts, and the crude production, spotty execution, and abundant songwriting clichés displayed by this album exemplify just why. At the time of its release, these issues (best exemplified by Glen May’s high-pitched screams) weren’t nearly as obvious, but all these years later, would-be fist-pumping anthems like “Warriors of Metal,” “Fall into the Hands of Evil,” and “Thru the Night” seem almost impossibly naïve and unimaginative. Musically, thrash metal is not in the band’s aural vocabulary and only now and then do they rove anywhere near speed territory. Overall this album is extremely catchy and easily accessible for those who like a bit of aggression and atmosphere within their metal. Very consistent and the majority of the album is top notch. Though the epic taste is riddled throughout this album, it wouldn’t come close to their next release. Either way, Legions Of The Dead is pure nostalgia for those who were alive in those ancient, simpler times, before heavy metal’s genre templates had been finessed and then expanded in hundreds of intriguing directions.

Track list:
1. Warriors Of Metal
2. Fall Into The Hands Of Evil
3. The Battle Of Armageddon
4. Legions Of The Dead
5. Tyrant’s Revelation
6. Listen To The Preacher
7. Knight Of Darkness
8. Thru The Night
9. Sacrifice
10. Time Is Running Low