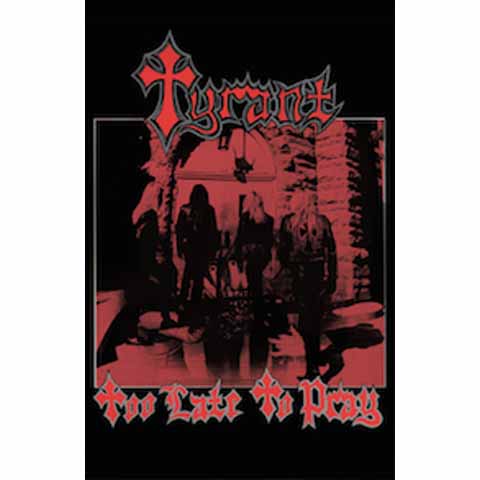 Tyrant put out three albums back in the 80s and early 90s, and had a name that about a billion other bands shared. But these guys were just awesome, and you’ll really never hear anything like them again. Tyrant played a style of metal that was as heavy and thick as molasses, with a sludgy, brick-like guitar sound and a gooey, ominous sheen to the songwriting that added a lot of epic punch. Their second album, Too Late To Pray, was released in 1987 and it came with an ominous, blood-red cover that would draw the attention of any young metalhead. The album greets you with the dark, evil, and chilling to the bone intro titled Tyrants Revelation II, a slow, doomy riff accented by a synth and beating drums with the powerful voice of Glen May bellowing over it all. Following the intro, the album immediately kicked into the title track Too Late to Pray, a mid-paced number featuring heavy-as-hell riffs, falsettos, and blistering solos. Back in 1987 most people probably wondered what the fuck was going on? How could it be possible to write traditional metal with such an atmosphere? Tyrant are best when they slow down and churn out really epic, searing melodies with resident Norse God Glenn May’s deep, commanding grunts and growls over them. The compositions flow so well that you feel like you’re in the middle of the world they’ve painted; this dark, grungy, tormented apocalypse. Songs like the maelstrom of metallic melody Valley Of Death, the booming Babylon or the thunderous The Beginning Of The End are some of the finest the album has to offer. But you also get some really great faster, pugilistic tunes, too, like the one-two punch of the title track and Beyond The Grave, the dirty, nasty Into The Flames and the careening, kinetic firestorm of the very aptly titled Eve Of Destruction. Too Late To Pray is a work of art – a goddamned heavy metal milestone, a real genre-transcending masterpiece. It’s a very meaningful album that speaks on a larger, conceptual level about real, honest themes of guilt, burdens, the feeling of impending doom and resolution. There’s really nothing happy or condescending about it – this is a band caught in media res in the middle of a 10-song apocalypse, and suffering all the crises and consequences you would expect. Too Late To Pray is an album of epic, life-affirming, evil-fighting heavy metal that any fan needs in his or her collection now. Absolutely essential.