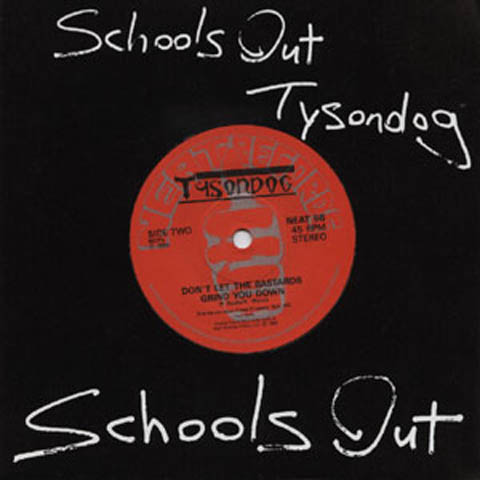 Generally most will argue you into the ground that NWOBHM was more than dead by the mid to late 1980’s, but Tysondog were one of the few that certainly believed else wise. The Schools Out single was released from their final album Crimes Of Insanity an album that would’ve stirred up a lot of attention if it had been released several years earlier. Tysondog were a little late but it would be unfair to leave the band out when talking about Nwobhm acts that still were carrying out the torch at this point. Im thinking about bands like Cloven Hoof and Satan or why not mentioned Elixir that released their debut album in 1986, a damn fine piece of Nwobhm music. Well back to Tysondog, the band had some strong influences of the UK movement here but they turned things up a notch and were faster and had a heavier production that many of the Nwobhm acts. This album had Clutch Carruthers on vocals and his voice is more raspy, unclean and aggressive comparing to Alan Hunters. There are tracks on the album were he does an awesome job hitting those high notes and carrying out great choruses, really his singing is actually very similar to Hunters but overall heavier. Another amazing factor here is guitarist Paul Burdis, the one and only axeman here. It seems a little rare to find UK bands of this style with a single guitarist and listening to this album without knowing this fact, you’d easily be in the belief there’s two guys here. The guitar work is very fast, swift, catchy as hell, and the solo’s are memorable. Drummer Rob Walker loves annihilating things with the double bass and beat the shit out of the rest of his drums. The A-side of this single is a good version of the Alice Cooper classic and the track fitted well with the pace on the album but as a single track I rather would have preferred to have seen the B-side Dont Let The Bastards switched over as the A-side. This track shows what Tysondog was all about, pure heavy metal in the NWOBHM form with an upgrade on speed and force, delivered extremely well. Some might say that comparing to todays metal they might feel a bit predictable but for the time this was high class and those looking for classic UK metal in one of its fastest and heaviest forms should look no further. .