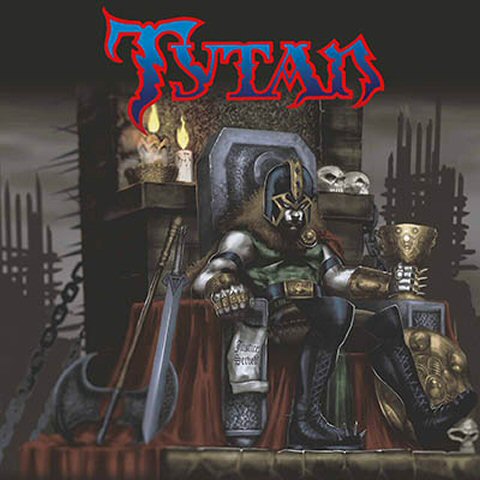 When bassist Kevin Riddles left the original incarnation of Angel Witch in the second half of 1981, it was a shock to the metal community. The multi-talented Riddles lost no time declaring that he would be keeping the spirit alive with a new venture. He teamed up with vocalist Karl Swan to form Tytan. Musically, Tytan were nothing like Angel Witch, relying on strong melodies, Swan’s remarkable vocal range and the heavy use of keyboards. Kamaflage Records (also responsible for Tank) issued Tytan’s debut 7” single/12” EP »Blind Men And Fools« in 1982 – a soon to be NWOBHM classic. However, it took another three years for Tytan’s first album “Rough Justice” to hit the shops. It was too little too late. Kevin Riddles carried on for a little while with different musicians but towards the end of the decade Tytan was no more. But then in 2017 justice was served! Tytan played some fantastic re-union shows (amongst others at Headbangers Open Air and Brofest) with Riddles playing bass and taking over vocal duties. The old material sounded as good as ever and the new songs clearly showed that Tytan were still a force to be reckoned with. The 2017 album, aptly named “Justice Served”, does feature three of the new songs already performed live, as Kevin Riddles explains: “Yes, that’s correct, ‘Reap The Whirlwind’, ‘Fight The Fight’ and ‘Billy Who?’ have all received great reactions whenever we’ve played them and seem to have been welcomed by fans old and new alike.” Apart from “Forever Gone”, a re-recording from the “Rough Justice” album to highlight the band’s current line-up, all the rest of the material is brand new. “I always hoped I would have the opportunity to record the songs that I’ve been writing,” comments Kevin Riddles. “The songs on “Justice Served” had been written for a while, but we needed a label that had the faith in the band. Our producer was Chris Tsangarides, we spent what we needed to spend and we got the album we wanted. The name of the album is a play on words designed to link the two albums and the long period between them.” Tytan never really were your “typical NWOBHM band” in the respect that they aimed at a more melodic overall style, using keyboards as well. So in a way comparable to Praying Mantis… melodic, accessible but never wimpy! “Yes, I couldn’t agree more,” says Kevin Riddles. “We can only write and perform from the heart. We never aimed for anything other than being our true selves! I always wanted to use keyboards to give the songs more depth and melody. “Justice Served” is our way of saying ‘we’re back’. We are here, we are still writing and performing and will continue for as long as it’s still fun and people want to hear us play.’”