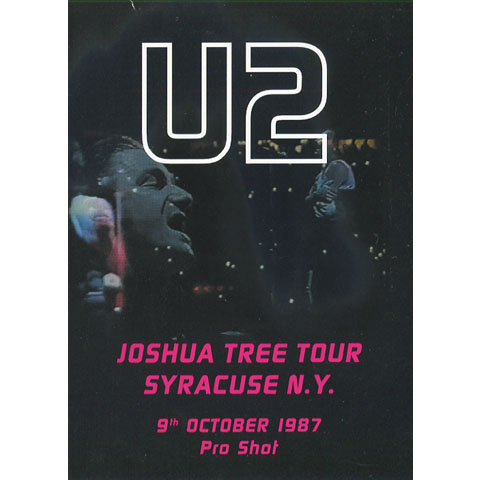 Six years ago, Rolling Stone labeled the Irish rock band U2 the “next big thing. The magazine is prone to such hyperbolic, self-important statements. But this time it has come true. U2 is simply the most important group in popular music. It’s not just a matter of hit singles (U2 had two No. 1 songs this year) and a best-selling album (“The Joshua Tree” spent nine weeks at No. 1). It’s the way the band makes an impact on its public as well as the magnitude of the public. It’s the way U2’s performances become events instead of concerts. This dvd was recorded at the Carrier Dome in Syracuse, New York on the 9th of October 1987 during the bands The Joshua Tree Tour, in front of a sold out arena meaning almost 40 000 visitors. Opening acts were Los Lobos and Little Steven And The Disciples Of Soul. The band opened the concert with Where The Streets Have No Name and I Will Follow and we were treated with several U2 anthems such as Exit, In Gods Country and Sunday Bloody Sunday. Then Bono brings a fan on stage to play guitar during People Get Ready and they band performs Bad were Bono adds some snippets from The Beatles You’ve Got To Hide Your Love Away by repeating the line, “love will find a way,” several times during the track. More anthems follows with New Years Day, Pride (In The Name Of Love) and With Or Without You and the when its all over and the band are leaving the stage we can still hear the audience continuing to sing the final song, 40. A magic night for us who where there