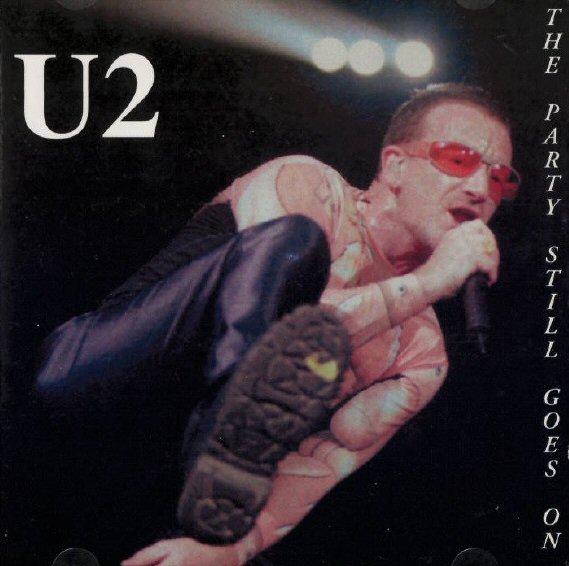 U2 -The Party Still Goes On dcd

For the second leg of the European Popmart tour the band had Audioweb as support act. The two bands hit the Ullevi Stadium in Gothenburg, Sweden on the 2nd of August 1997. Before the band went out on their world tour for Popmart one would think that this was a band probably behind its prime. They had done it all and had nothing more to prove and nothing would probably ever top the ZOO TV tour stage wise. However the Popmart tour was nothing less than mindblowing too. The band was creative both inventing and re-inventing ideas. Being at the show was like being at a huge rock concert and at the same time watching MTV or visiting internet or just strolling through an art gallery and all at once. There were so much new things happening all the time just keep the watchers and probably the band too on their toes. The show had settled and find its place since the tour started in Las Vegas back in April. The music came together so well with the rest of the show. There were messages and hits all the time and there were lots of references to the counter-cultural icons and a tip of the hat to its pathfinders and guides throughout the latter part of the 20th century. At the same time it gave the chronology of a little rock band from Dublin Ireland who once had a big dream of becoming a big rock group – now they’re beyond the dream, but still try to make it come through. They blow new life into the “dream” and transcend the experience of rock (music, art, visuals) well into a leading position, aspiring for a place in the history books in the 21st century. I think they succeeded in “killing the monster, before the monster killed them!”. They even succeeded in letting a big (red and thumping) heart get across the cyber space and reminding a blasé and “over-stimulated” rock generation of what it once was all about, and that “behind the masque” and beyond the clichés there’s still a wish to entertain with meaningful communication, with sincere songs and with a pathos that’s beyond our difficult (but also exciting) times of “transformation into a new world, a new millennium” and whatever. I don’t know if catharsis is the right word, but it sure was an experience that took you to the edge of your mind’s fantasy-limit. As if they succeeded in what the psychedelic era once aimed for, but with a technological and humorous concept instead of a biochemical experimental attitude. Real “far out”, but yet with a collective sharing the same “mind-blowing” experience. It balanced on a thin line between speculation and ingenious irony and humour, but I think they landed on the right side of it most of the time. If there is such a thing as “organic technology” this was it: A “human touch” on the “accelerated culture”, which hopefully made it clear that human spirit is one main-ingredient needed in the evolution. The whole concert experience was a well performed true piece of art. Looking back in the history books in ages from now, U2 probably wont be seen on as a small rock band but the Picassos, Dali’s of the 20th century. This double allbum comes with 5 bonus tracks from the Gothenburg show on the 8th of June in 1992. Limited to 400 copiese