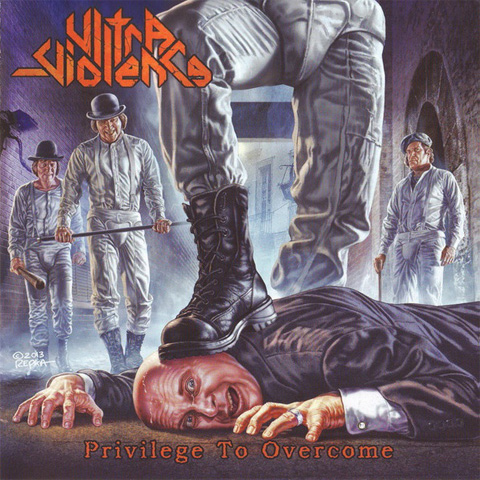 This is a band that bears the name taken from one of the best albums to come out of the Bay Area thrash scene during the late 80s courtesy of Death Angel, one can naturally expect a similar exercise in high octane, riff oriented goodness that’s just a tad bit too fast and vicious for Exodus, but not quite a full out plunge into the darkened abyss of proto-death metal in the mode of Slayer or Possessed. While one can’t help but be prepared for a consistent dose of cliché given the obvious imagery on the cover, Privilege To Overcome is not quite a complete throwback to the 80s, though it draws more from that period than not. Occasionally hints at the modern 2000s character of Tempo Of The Damned and The Evolution Of Chaos creep into this thing, particularly in terms of the guitar sound which tends to be a bit chunkier and takes a little bit of the present sound wars craze under it’s wing, though in a more measured way than recent Testament releases. The vocal attack flirts with the semi-death grunts tend to characterize recent work by Chuck Billy and Max Cavalera, though the best analogy might be to the transitional early 90s works of Defiance when Steev Esquivel took over the microphone. Overall, this band’s sound has a bit more of a crude stomping character (especially on slower, groovier songs) than the nimble busyness with a hefty side order of aggression that typified Eternal Nightmare and their namesake Ultra-Violence, but it does draw some noticeable influence from both in other respects. For the most part, this album tends to play off of the speed factor and only occasionally finds itself caught in a meandering mid-tempo rut, which is an effective route given the largely simplistic riff set. Occasionally a Slayer inspired tremolo line might grace the arrangement for a quick pass as heard on the closing section of Order Of The Black, the otherwise straight up Death Angel worship of Stigmatized Reality veers off into technical death metal territory at a few key points with the tapping lead lines blazing and the drums blasting at insane rates that would make Hang The Pope seem tame by comparison, and the quick ditty You’re Dead has Nuclear Assault meets D.R.I. punk influenced thrash written all over it. But for the most part, this tends to keep the basic concept of up tempo neck wrecking in a conventional way, reminding heavily of the sort of fast yet intelligible character of a number of different Bay Area albums between 1987 and 1989, particularly on the opener Spell Of The Moon and The Beast Behind Your Back where the riff set stays simple and isn’t as dressed up with wildly technical leads and blast beats. While not quite the greatest thing to come out of the ongoing craze with resurrecting thrash metal’s past, this album definitely has enough energy to make up for any shortcomings in originality. It’s a bit less obvious of a throwback to the 80s than a number of Greek and Brazilian bands that are going Teutonic, but it doesn’t quite fall into many of the other niches that have been carved out of late between the cleaner style exemplified in Penthagon and Ground Control, or the progressive quirks of Vektor. It’ll probably go over quite well with fans of Shovel Headed Kill Machine and some of the more modernized bands attempting to follow after it, but it definitely has a lot of what tends to draw in fans of Warbringer, Violator, Havok and a few others that have been tinkering around the edges at times but not fully plunging into outright modernity. But pretty much anyone who is looking for thrash that puts a heavy emphasis on aggression will find a welcome experience here.