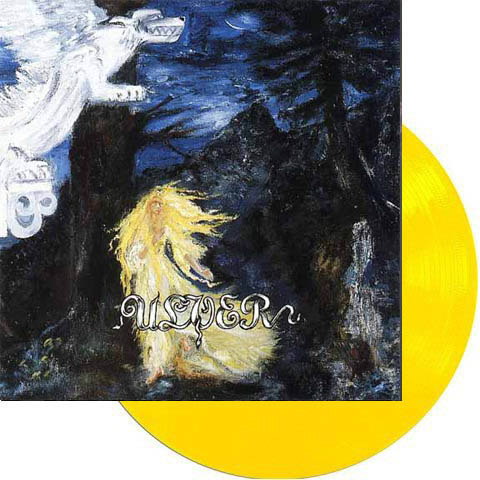 2019 press on yellow vinyl with gatefold cover and an 4 page insert. Made for the US market only

The first of several surprising stylistic turns for Ulver, who was originally pegged as a black metal band, Kveldssanger is an album of acoustic, classically tinged Norse folk songs, all written and arranged by vocalist Garm. This style was hinted at during some of the acoustic interludes on their previous album, Bergtatt, but here it has been more fully developed into actual songs with thoughtful, though sparse, arrangements. On some of the songs, Garm’s vocals are heavily overdubbed to create a choir-like effect, and there are even a couple of a cappella tracks. However, most of the album is instrumental, centering on quiet acoustic guitar picking, with some cello and flute parts also added. In keeping with the cover art, which depicts a dead-calm lake and a misty forest, the music evokes a feeling of quiet, eerie solitude. Listening to Kveldssanger, it is hard to picture this album being made by a group still in their teens, let alone by one whose next album would yield the savage black metal of Nattens Madrigal/Madrigal of the Night. In any case, this album stands as a bold and successful effort, one that helped certify Ulver’s reputation as one of the leading black metal bands, even if it ironically doesn’t involve any actual metal.