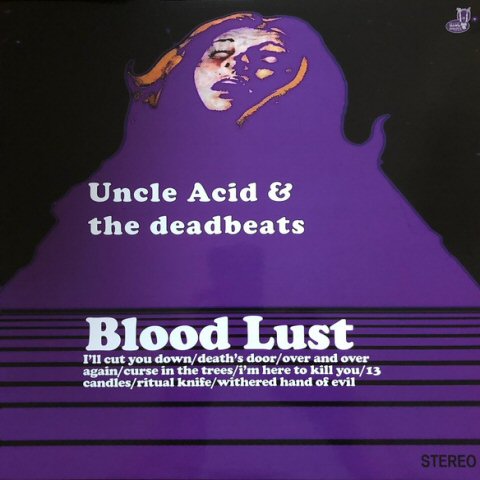 Just as they did with their unexcitingly named 2010 debut, Vol. 1, Uncle Acid & the Deadbeats dedicate their sophomore album, the following year’s tellingly named Blood Lust, to celebrating the Summer of Love’s soul-chilling autumn: a blasted landscape, post-flower power, resembling Altamont’s killing fields, reeking of the Manson Family murders, and, naturally, sounding like a mish-mash of all of the apocalyptic musical forces that converged upon that era. We’re talking a mixture of psychedelic rock’s harrowing comedown, garage and punk rock’s nihilistic ascent, and the earliest manifestations of heavy metal’s occult-laced, nerve-damaging bludgeon (later reclassified as doom) — all poured into a deadly cocktail that Hunter S. Thompson would surely guzzle down with relish. But there’s more, and this is the twist…the Cambridge-based trio also acknowledge their very “British-ness” with a passion for B-quality Hammer horror movies that, along with warmer organ sounds and fragile whining vocals, lift the mood of many of their songs to the point where one at least feels the group is having some fun, not slashing their wrists in abject misery. The clamorous mega-riff of opener “I’ll Cut You Down” invites an army of zombie go-go dancers to frug their brains out; the circuitous guitar licks and jaunty clip of “Over And Over Again,” “Ritual Knife,” and “13 Candles” prove one need not sit still during satanic rituals, and the snail-paced offerings such as “Death’s Door” and “Withered Hand of Evil” finally bow down to Black Sabbath’s Marshall-stacked Stonehenge without further reservations or distractions. No, none of this is exactly groundbreaking (heck, not in the slightest — lest it involve breaking ground in a cemetery), but Uncle Acid & the Deadbeats make it work nonetheless on the strength of their convictions about this peculiar period and its music, ultimately proving yet again that great songs will always transcend the most recycled of building blocks.