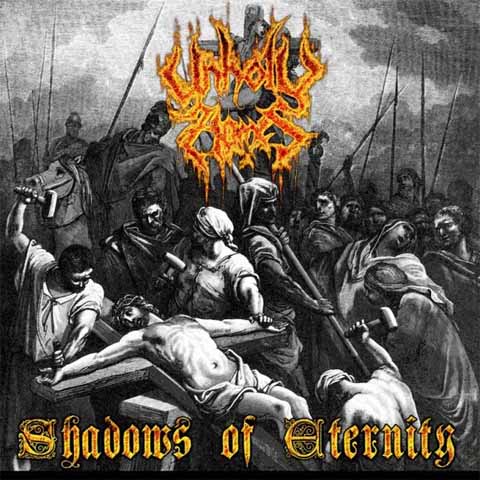 Unholy Flames was formed in Contagem in Bela Horizonte, Brazil back in 1996 and they debuted the year after with the 4-track cassette and cd Christian Denial. After that you could wonder where the hel they went because it was quite for 13 years before 2 more tracks were released on a split abum and then another 7 year wait before we finally got their debut album, Shadows Of Eternity. This is old school black metal where the vocalist screams and throws yelling fits in a more higher toned fashion. He has some matching ability to the underlying music instead of just raging over top of it like it was his podium and you’re the unsuspecting audience. They have some other keyboard segments in the background to enhance the atmosphere with the slower, repeated parts and are just as fitting since they come and go as subtleties should because soon the band does a 180 degree turn around and turn up the speed again

Track list:
1. Under The Spell Of Flames
2. Illusion On Sins Land
3. My Obscure Visions
4. Imprecations Night
5. By The Insane Dominion
6. Warriors Of Darkness
7. Shadows Of Eternity