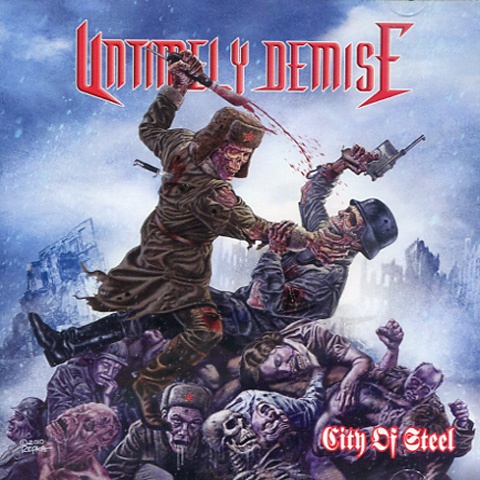 Canadas Untimely Demise attempt to cram quite a lot into their debut City Of Steel, and I feel like it often becomes cluttered with the excess, but for a band performing thrash metal in the modern era, I do feel like they have enough weaponry in their arsenal to succeed where so many others are failing. First and foremost, they use a classic speed/thrash foundation with snarling, blackish Mille Petrozza style vocals, and then they heap on a lot of solos, thick melodic rhythms that often seem more in line with At the Gates, Carcass circa Heartwork, or other, aggressive melodeath bands, all wrapped in chunky distortion that is suitable to delivering the violence, yet catchy enough to thrill fans of various genres. Most of the individual components do succeed on their own right, and in particular I like that Matt Cuthbertson’s vocals often veer away into deeper, manly territories that create a cool counterbalance to the snarls, which often border on goofy. Tracks like Bloodsoaked Mission and Hunting Evil throw a ton of riffs at you, and many of them do stick, though I sometimes feel like the lead segments are nothing but needless. They’re not bad, necessarily, I mean the guys can play, but I feel like they’re a compromise and they often leech off some of the band’s viral aggression, which would be better suited to just clout you over the head and leave the virtuosity to someone else. It’s like someone handed Untimely Demise the metal handbook, and said let there be solos, and there are some pretty fucking extensive solos, tipping the balance from cool flights of frenzy to over-indulgence, and this album is so much better wherever it is void of them, like the forceful verse collisions of City of Steel and The Unmaker. Still, what I like most about these Canadians is that they understand that this genre requires riffs, and they’ve got a great many of them that largely show that care and effort was placed in their construction. I do often feel like a few of the songs could be edited down, because the band don’t have that same level of efficient cohesion as say, Artillery, on their finer works, but I’ll still take this over so many ‘thrash band’s that arrived with nothing to show for themselves but 80s worship, instead of realizing, ‘gee, this music is still great and we could still do something with it’. Untimely Demise do not have such an inhibition, and while their product is not completely original (a lot of bands are writing such heavily melodeath influenced thrash), it’s enthusiastic as opposed to sarcastic, and the result is you’ll be banging your head and doing the air guitar far more than some crap like the band’s similar countrymen 3 Inches of Blood, who Untimely Demise are far superior to.