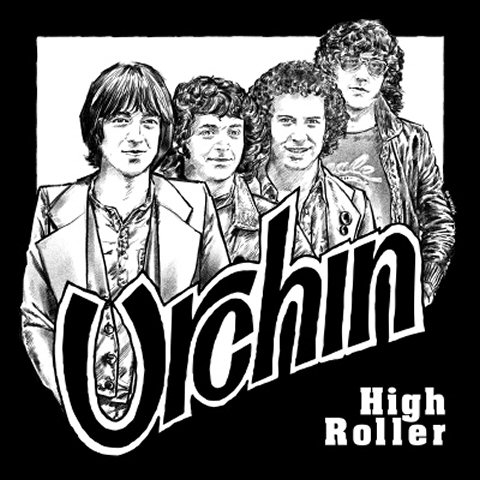 ‘Urchin could prove to be the forerunners of a new revival of heavy British rock music’. Those lucky enough to have a copy of the first Urchin 7″ single “Black Leather Fantasy” from 1977 (released on DJM Records) may know these words. They are printed on the back of the promo sleeve. And how prophetic the text turned out to be. Mind you, Urchin did not take the world by storm in the following years but they made history nevertheless! Two former Urchin members, namely guitarists Adrian Smith and Dave Murray, later joined arguably the world’s greatest Metal band: Iron Maiden. Urchin was originally formed towards the end of 1974 in Hackney, East London (out of the ashes of Adrian Smiths’ and Dave Murray’s school band Evil Ways). This is how Graham Sclater initially came in contact with the group: ‘I met the band members, Adrian Smith (lead guitar/vocalist), Barry Tyler (drums), Alan Levett (bass) and Andy Barnett (lead guitar) at their rehearsal room in a basement at 144A Victoria Park Road, Hackney, East London in June 1978. I saw them play for the first time at The Swan in Hammersmith, London, a few weeks later and we agreed to work together’. By this time, Urchin had already released their debut 7″ single ‘Black Leather Fantasy’ on DJM Records. It was a brilliant piece of British Hardrock, worth every penny of the healthy three-figure asking price (in British Pounds) you would need to fork out in order to buy a copy today. ‘Black Leather Fantasy’ and the flipside ‘Rock ‘n’ Roll Woman’ were already hinting at the explosion of the N.W.O.B.H.M. some two years later. However, in 1977 Punk ruled the UK. So the critics were not too keen on a band like Urchin. On May 21st 1977 Monty Smith reviewed the single in the New Musical Express with the following words: ‘You’d think a group of youngsters would have someplace higher to aim for than pale Purple imitations. The reviewer was probably a bit shocked that Urchin stuck to the traditions of British Hardrock and not jump on the Punk bandwagon as was usual for 1977. Regarding the material on this album, band manager Graham Sclater says, ‘The band rehearsed when they weren’t gigging and regularly recorded their material. Many versions were recorded of their songs and those were recorded at different times throughout 1978-1980 and all in the basement of 144a Victoria Park Road, Hackney, East London. Richard (Dick) Young joined the band for a while and played keyboards on ‘Lifetime’, ‘The Late Show’ and ‘Watch Me Walk Away’. Dick also wrote the last two songs.” ‘See Me Thru’ was another song discussed to be included on this vinyl, it’s the same song as ‘See Right Through You’, which was recorded live in 1985 at the Marquee by the Adrian Smith Project and The Whole Population of Hackney. Graham Sclater confirms: ‘Yes, I believe it is. It was written by Dick’s friends – Crowford and James – but the quality of the version I’ve heard is very poor so It didn’t make it onto the album. It has been very difficult tracking down the best recordings from sources around the world, treating the tapes and mastering them but I was very pleased to help them put it all together. I am hopeful other tracks may be available in the future but at the moment I don’t know what the quality will be like. It is amazing how popular Urchin still is after more than 30 years and it proves they had something original and very special that was suppressed by the wave and hysteria of Punk’.