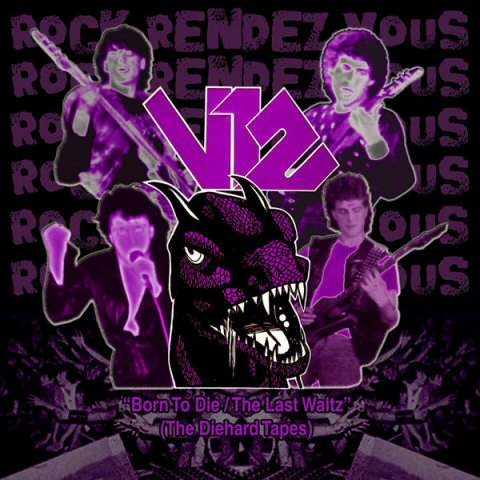 V12 is the first release of a series called Lusitanian Metal Classix, made up by three Portuguese labels with an aim to bring to the heavy metal collectors the unknown glories of Portuguese Metal from the 80s and early 90s. Considered one of the best Portuguese Metal bands ever, this band started out in 1984, but only in 1987 they recorded their first demo Born to Die, with four studio tracks. After a while in 1988, one memorable concert was recorded on audio and video bootleg, to spread around for the fans. The audio and video still today is being shared nationally and internationally by fans of the band and curious headbangers. This anthology album will include the full gig, recorded on the 22nd of January 1988, along with the demo, since the live sound is very good, which many even consider better than their demo, and a two-song rare rehearsal. This is the early stage of V12 with first singer Raf Maya, very influenced by Manowar, in fact the band at this stage can be compared to a mix of early Helloween, Manowar and even Manilla Road. Their epic approach makes sense comparing with the last two bands and even some Maiden from the Piece of Mind-era. The faster songs have an obvious early Helloween influence but also early Metallica/Slayer. This is absolute steel of the highest order: Power-Speed Metal with heroic high pitch vocals. This anthology album is a project that these labels have been working on for a very long time. The originally idea was to reissue material with just the first era when Raf Maya was the singer. The labels have also tried to get hold of the rights for the bands first and only album released in 1990. However they have failed to get that back from the greedy hands of Universal Music so they decided to extend their first plan and added a rare promotional live gig, from the 21st of February 1990, of the debut album recorded in 1990. Both these recordings where made at the Rock Rendez Vous an almost mythical venue in Lisbon where lots of metal bands played throughout the 80s. This second performance is brutal, revealing the true power and heaviness of the songs on the album (the studio recording for the album was too clean and thin sounding), theres also two tracks here that didnt make onto the studio album. These two unreleased tracks make it extra special for any fan of the band. Here in 1990, when Jorge Martins where doing the vocals, the band had taken a technical Power Metal direction influenced mainly by late 80s Maiden, Fates Warning and early Queensryche. The booklet for this anthology disc is something extra special as this 20 page booklet is full of rare photos, biography, lyrics, memorabilia pictures and liner notes