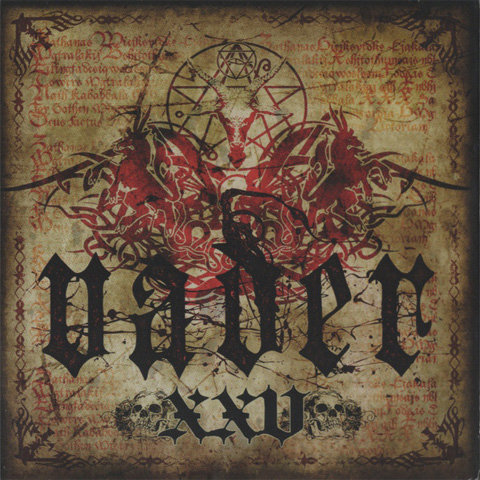 In Roman numerals, XXV means 25 — and Vader has described this 2008 release as a celebration of their 25th anniversary. 1986 has frequently been cited as the year of Vader’s formation, which would mean that 2008 marked their 22nd anniversary instead of their 25th; however, 1983 has also been cited as the year that Vader’s earliest lineup came about. But whether 1983 or 1986 is correct, there is no question that Vader has a long history, and this two-CD set (recorded in 2007 and 2008) finds the Polish outfit revisiting more than 25 songs from the past. Although long-time Vader fans will recognize many of the song titles, XXV is neither an anthology nor a best-of; rather, it is an album of re-recordings of material that Vader previously recorded in the 1990s or early to mid-2000s. Some of Vader’s early recordings were low-budget affairs that suffered from dodgy production, but the production on XXV — sharp, clean, heavy and thick — brings audiophile-like quality to some songs that were previously recorded with demo-like quality. Some hardcore Vader devotees will no doubt insist that they like the rawness and less-than-professional sound of those early recordings, which do — to be sure — have a certain primitive, garage-like charm. However, there is also something to be said for the increased heaviness that better production gives the older tunes that Vader recreates. That said, someone who is new to Vader is probably better off hearing the original versions despite their imperfections; those recordings, after all, are part of Vader’s history. But XXV (which offers liner notes in both English and Polish) is a well executed effort that long-time admirers will find to be both enjoyable and intriguing. The track ‘Wyrocznia’ features a guest appearance by Kat vocalist Roman Kostrzewski and Seth from Severe Torture on ‘Blood Of Kingu’.