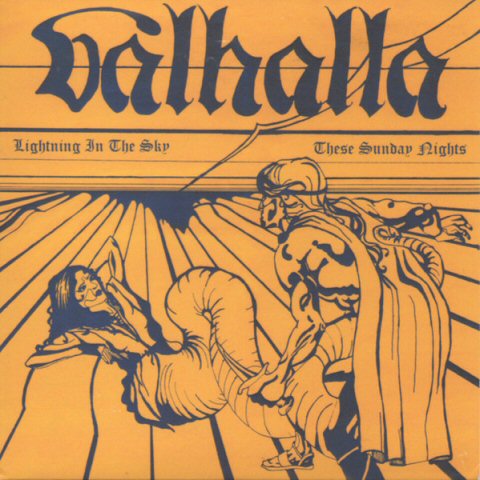 Valhalla -Lightning In The Sky cds

Mini cd replica of the legendary NWoBHM single from Valhalla. The original single was released in a generic paper sleeve however there was an original artwork made and that artwork has been used for this re-issue. It features the same tracks like on the original single. Official reissue authorized by the band in a limited run of 500 copies only. Valhalla was formed in Leicestershire during the summer of 1980 (there would be another Valhalla a year later that was signed to Neat records). The two tracks here were recorded at the Sounds Good facility in Windsor and released on the bands own made up record label Asgard. Guitarist Mark Evans joined Wikkyd Vikker a year later so its unsure what happend to Valhalla after that point. This Valhalla was another of those hopefully acts that sadly were lost. Listen to the splendid Lightning In The Sky and you will find an undiscovered classic of the genre

Track list:
1. Lightning In The Sky
2. These Sunday Nights