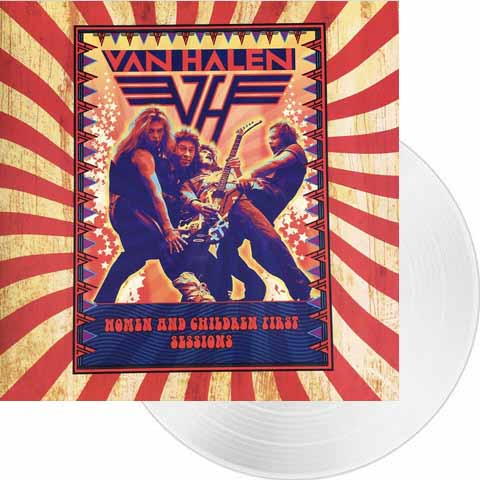 After two pure party albums, the inevitable had to happen: it was time for Van Halen to mature, or at least get a little serious. And so when the band went into the Sunset Sound Studios in Hollywood California in 1980 to record Women And Children First they had both started to get heavier, both sonically and, to a lesser extent, thematically, changing the feel of the band ever so slightly. Where the first two records were nothing but nonstop parties, there’s a bit of a dark heart beating on their third album, most evident on the breakneck metal of Romeo Delight, but also the pair of opening party anthems, And the Cradle Will Rock and Everybody Wants Some. This was a signal of Eddie’s burgeoning ambition and his desire for respectability, and there are already some conflicts between this somber musicality and David Lee Roth’s irrepressible hunger for just plain fun. This album gives us a glimpse of the recording session for the Women And Children First album. Here we have some early versions and instrumental outtakes recorded during those 17 days. There’s some significant growth here to the writing, evident in the winding, cynical neo-boogie Fools and also in the manic Loss Of Control, which gallops by with the ferocity of hardcore punk. These was the heaviest music session Van Halen had made only lighten up by Diamond Dave’s country-blues jive fixation with Take Your Whiskey Home. Besides the Women And Children First session we also have three rare bonus tracks like an early David Bowie cover taped back in 1976. The tension between the two extremes that were Eddie and Dave might have started here but theres not denying that the two together were able to make dynamic music and its all captured on this stunning recording.