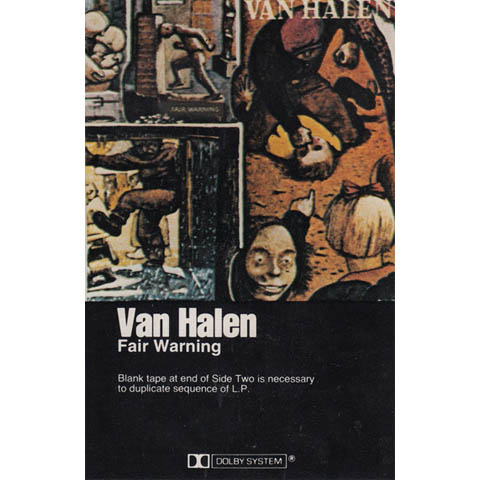 Of all the early Van Halen records, Fair Warning often gets overlooked — partially because it’s a dark, strange beast, partially because it lacks any song as purely fun as the hits from the first three records. Because of that, there were no hits from Fair Warning that turned into radio anthems; only “Unchained” and, to a lesser extent, the grinding opener, “Mean Street,” rank among the group’s best-known songs, and they’re not as monumental as “And the Cradle Will Rock,” from the preceding album, Women and Children First. There’s a reason for that: this album ain’t a whole lotta fun. Fair Warning is the first Van Halen album that doesn’t feel like a party. This may be a reflection of the band’s relentless work schedule, it may be a reflection of the increasing tension between Eddie Van Halen and David Lee Roth — the cause isn’t important, because whatever the reason, Fair Warning winds up as a dark, dirty, nasty piece of work. Gloomy it may be, but dull it is not and Fair Warning contains some of the fiercest, hardest music that Van Halen ever made. There’s little question that Eddie Van Halen won whatever internal skirmishes they had, since his guitar dominates this record, even with the lack of a single dedicated instrumental showcase (the first time he lacked one on a VH album). Eddie sounds restless here, pushing and pulling the group toward different rhythms and textures, from the disco beat that pulsates on “Push Comes to Shove” to the swinging rhythms on “So This Is Love?” and, especially, the murky synths that comprise the instrumental “Sunday Afternoon in the Park” and the grimy, gunky closing rocker, “One Foot Out the Door.” Either inspired or spurred on by the gloomy rock Eddie cranked out, David Lee Roth casts his net far wider than his usual litany of girls and good times. He spits and swears, swaggering without his usual joie de vivre, with even his sex songs feeling weary and nasty. Whatever spawned it, that nastiness is the defining characteristic of Fair Warning, which certainly doesn’t make it bunches of fun, but it showcases the coiled power of Van Halen better than any other album, which makes it worth visiting on occasion.

Track listing:
1. Mean Street
2. Dirty Movies
3. Sinners Swing
4. Hear About It Later
5. Unchained
6. Push Comes To Shove
7. So This Is Love?
8. Sunday Afternoon In The Park
9. One Foot Out The Door