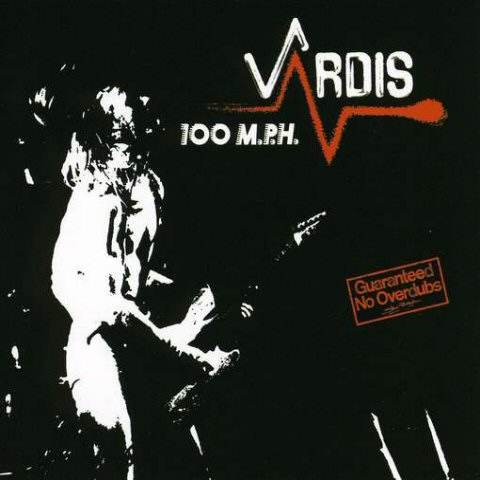 Among the many bands reluctant to be associated with the New Wave of British Heavy Metal tag line, few were as justified in their protests as Yorkshire’s lovable boogie rock merchants, Vardis (formerly Quo Vardis). Indeed, any links between the trio’s turbo-charged rock & roll and outright heavy metal were tenuous at best, but with independent record label Logo looking to sign the band responsible for the fierce version of “If I Were King” featured in their New Electric Warriors compilation, Vardis decided that they could bang their heads quite convincingly, thank you very much. Thus a deal was struck, and, wishing to waste no undue time tinkering in the studio, Vardis proceeded to compile their 1980 debut, 100 MPH, from the best live versions of their road-tested repertoire. Because of the less-than-high-quality venues the band was known to perform in at the time, the resulting LP was hardly possessing of the highest-fidelity sound, but its blue-collar aesthetic and high-energy feel actually lent themselves perfectly to the band’s good-time hard rock sound. Besides the aforementioned “If I Were King,” 100 MPH rounded up most of Vardis’ previous single releases, including the title track, “Out of the Way,” and “Destiny” — all boasting tightly executed performances that greatly improved upon the studio originals. In terms of new material, the potent “Living out of Touch,” the very Saxon-esque “The Loser,” and the irrepressible “Let’s Go” stood out as highlights, helping to confirm 100 MPH as Vardis’ finest hour.