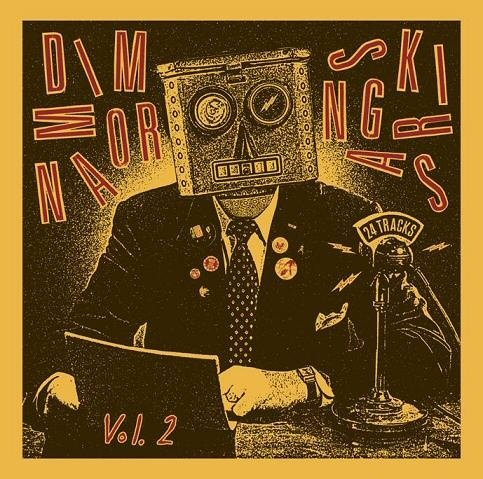 Volume 2 in the Dimmorna Skingras (Mists Dispelled) series feels like a whole slightly smoother than its predecessor, which is obviously a big plus. Ten bands get here a few minutes to convince the listener with its contemporary descriptions filled with misery and bastard munity. First up is Stockholm band Handgranat (Grenade) that plays classic Swedish hardcore punk with crust undertones. It however sounds a little tame in places, and it feels like the music never really gets going and will come into its own. Here’s something to work on, but Grenade is not quite there yet. Other rolls will be when PP7 Gaftzeb takes out his guitar-driven tribute to the 80’s scene, and with dirty and repetitive melodies transforms auditory canals to the autobahn and wines straight through them again and again. Both songs are better than expected, but the sliding door is the one who wins the prize, and that by far. Mangle machine Stockholms Blodbad (Stockholms Bloodbath) is like a runaway elephant when their cavernous soundstage where the drums and the bass is taking over everything may seem somewhat overwhelming. The strange thing is that it works and sounds really fucking nasty in places, and although it is precisely such moments that tastes good, then it is the final and somewhat calmer song Va Fan (What The Hell) that is the golden grain here. Next strap into the ring is Trollhattan guys in Bombangrepp (Bombing Raids) that de facto sounds like a full-scale war, but mushy instead of fleshy since the much needed weight, unfortunately, never really comes. Vengeance Of Karma performs some crusty hardcore that includes a lot of everything and it creates a huge wall of sound that slowly is creeping closer and closer. It works better than it did for Bombangrepp, and its largely because the music and songs manages to create such a desperate atmosphere that it is on the verge of being unpleasant. A song like Desktruktivt Beteende (Destructive Behaviour) also offers a more melodic side which is a good thing. Out next is a street punk scented hardcore signed Bristles, who in energy and road frustration tastes really good. It shows that with politics, melody and a Captain Haddock attitude you can get far, and Checkpoint Sweden is a really good song. Passiv Dodshjalp (Passive Euthanasia) begins with a Red Hot Chili Peppers-sampling before they kicks off the previously unreleased song Inga Gaddar, Inga Brudar (No Fangs, No Chicks), and as usual it is uncompromising and full speed ahead that apply. Passiv Dodshjalp is not only one of Sweden’s most productive bands, they are also trying to raise the bar for each recorded song. Inavel (Inbreeding), as the next band calls itself, is a complete contrast to the previous bands, with their lo-fi punk almost becomes a stumbling block in comparison. I like the angular layup, but the sound still lack that depth and garage feeling that this kind of bands would benefit from. Von Boom on the other hand, create a pretty nice atmosphere with their straight on punk that still feels laid back and obvious. Good melodies, good riffs and a singer who fits the music so well. The best track is called Allt Ljus Pa Mig (All The Lights On Me), and its clearly a band you need to check up. The album ends with Thrashers, who in true juvenile and contagious spirit unravels anything that comes in its way. They have a demo like sound, that fits well, and the melodies and the attitude blends the best of both the 80- and 90s hardcore scene. Theres both anger and melodies here and its a band that should please even the most discerning punk rascals. Bottom lilne: Thrashers, along with Von Boom and PP7 Gaftzeb is what makes this album a must have in your record collection.