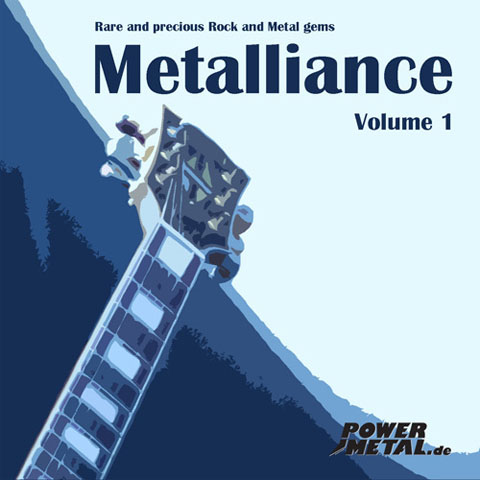 After 15 years of existence, the crew of one of the top rock and metal magazines in German language on the web has decided to put together a compilation with bands that they like. But just picking songs from existing albums would not pose an added value to the fans, so the bands were contacted and asked to raid their vaults for special tracks – alternative versions, unreleased songs or remixes. The success was considerable and Metalliance Volume 1 became reality in no more than three months. This compilation contains ten rare and unreleased songs by ten fantastic bands of which many a name will ring a bell for underground connoisseurs. The 10 gems here are: Watchtower a demo track with the technical progressive thrash giants Watchtower (a demo track from the technical progressive thrash act from The US, one of the best known names in the genre after their masterpieces Energetic Disassembly and Control And Resistence), Seventh Sin (taken from their third demo), Godslave (taken from Thrashed Volume III EP limited to only 222 copies), Killers (this song was featured on their dvd as background music but never released), Terrafyght (taken from their first demo), Memento Waltz (demo), Dark Suns (a very sentimental performance of one of the most underrated Nirvana songs), Level Field (an exclusive track from Alan Tecchio (ex-Watchtower, ex-Hades, ex-Non Fiction) together with Marco Ahrens from German progressive metal band Povertys No Crime), Mechanical Organic (this track was written for their This Global Hive Part two 2 release but did not fit the rest of concept so it was finished specifically for this compilation) and Wardog (an exclusive track sung in Klingon). Magazine editor Frank Jaeger says about the project: We have taken the legendary Metal Massacre Compilation series from Metal Blade records as a role model. We wanted to create a compilation of which people will talk in a few years saying ‘That was the album with the great version of track x’ or ‘remember that band Y has this exclusive song on Metalliance Volume 1’. We hope that the fans will listen to this compilation still in a few years as we do with Brian Slagel’s series today. That the start was met with so much enthusiasm by the bands and musicians is incredible. We thank all the bands on volume 1 as fans, because that is what we are: music fans. And this compilation is from fans for fans, made by some of the best bands around in their genres and countries.