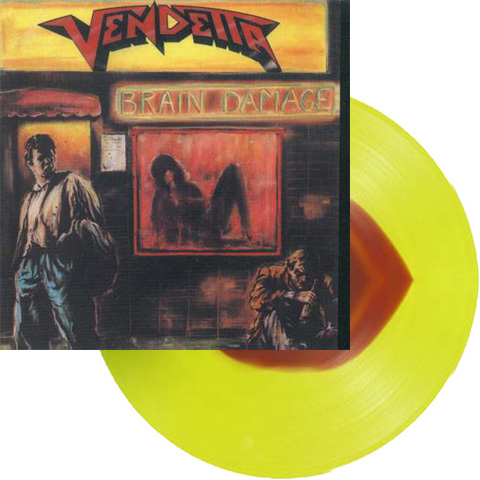 1988 was indeed a great year for heavy metal and more specifically thrash metal. While there was a lot of movement in the US and Brazil underground with many classics being churned out, Deutschland didnt lag behind by any means with thrash metal outfits such as Darkness, Paradox, Deathrow etc. opting for a slight drift in technical direction and eventually gaining cult recognition. Vendetta was another promising teutonic foursome to join this elite squad. If their debut was a riff fest of raw yet catchy proportions, Brain Damage shows significant maturity in songwriting while still retaining the crunchy sound that was a trademark of theirs. With a release of this calibre, itïs a shame this one went by unnoticed at the time of its launch. The production on this record once again bears a close semblance to its predecessor without much of its early rawness being vacuumed out whereas the musicianship is tight and precise as its always been. As on the former release, the vocal work is again a two man job with both the guitar players getting behind the microphone on practically all the tracks. Theres not much to choose from as far as the vocal delivery is concerned, but perhaps theres just a subtle snarl in Mickys voice as compared to Daxx. Their take on playing the guitar was simple. Take catchy thrash riffs, put in some inventive touches but dont butcher the hell out of them by either overdoing or trying to be super flashy. Heinerïs bass lines are explosive and are practically what created the backbone of the bands overall sound while Samsons talent behind the drum kit is strong and effective. With a steady and talented line-up, and taking a leaf out of the American thrash book of thoughts, namely the good old bay area sound and the mosh power of the east coast, it wouldnt come as a surprise to anyone out there that all the tracks on this are flawless pieces of thrash metal with a strong binding factor that creates a steady continuity throughout the length of the album. War comprises of a great bass solo, slick riffs, magnificent melodic lead harmonies and an infectious chorus chanting Warrrrr making it one of the best songs on this album. The next two tacks Brain Damage and Conversation are very much in the vein of the starter track, containing some meaty hooks and brilliant lead guitar work. Precious Existence starts off as an acoustic rocker and transforms into a full blooded power thrasher with a beautifully haunting dual guitar solo that is hard to miss. The remainder of the album is similar in execution, with the exception of perhaps Fade to Insanity which is total instrumental thrash mayhem with strong similarities to fellow Germans Darkness Tarsman of Ghor on their classic Death Squad album and in some parts technical stomping riffs a la Peace Sells era Megadeth. This was the last release by the band before they called it a day and decided to disband before reforming again just a few years back with a relatively new line-up to release a forgettable album. For 9 songs of pure adrenalin pumping thrash laced with top notch songwriting and excellent musical prowess, Brain Damage emerges a clear winner and should be in every thrash collectorïs collection. For folks that have not been acquainted with this band yet, if you cherish the vintage bay area thrash sound as well as the more straightforward direction of bands such as Meliah Rage and Powermad, then this is an absolute essential.