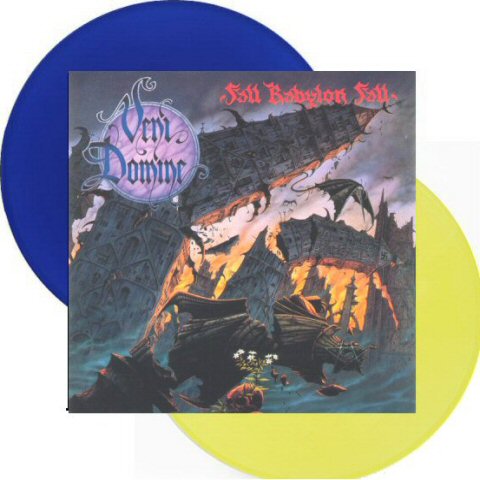 Double album with one yellow and one blue vinyl. Comes with lyric insert and a vinyl single on blue vinyl. The single coms with a velvet front cover. Limited 111 numbered copies

The best way to describe Swedens Veni Domine’s 1992 debut album would be epic and orchestral progressive metal with occasional doom or even goth-like tendencies. Fans looking for the doom metal the band would play on later album might be disappointed. Taking the heaviness of Iron Maiden and Black Sabbath but mixing in the operatic vocal aesthetics of Queensryche, Veni Domine has created a masterpiece in which epic length numbers abound. The albums first six tracks, for example, all come in the 7 to 8 minute range but are extremely well constructed in holding up under copious melodies that will pull you in and refuse to let go. Technical progressive metal number like “Armageddon” and “O Great City” exude a level of creativity that ranks among the finest of the genre, while “King Of The Jews” and “Wisdom Call” deliver abundant hooks of the near commercial variety. Veni Domine saves its best for last, on the other hand, in that the album closes with the 21 minute epic “The Chronicle Of The Seven Seals”, a masterful work which portrays events as described in Revelations chapters 5, 6 and 8. It is the high end and operatic lead vocal abilities of Fredrik Ohlsson that helps give the bands its signature sound. While not a concept album, Fall Babylon Fall takes its listeners on a musical journey starting with the deceiver of mankind before moving on to Christ’s crucifixion and eventually the 1000 year Millennial Kingdom and the ultimate judgement and destruction of the earth. It is worth pointing out that the majority of the albums lyrics are taken directly from scripture, particularly the book of Revelation. Overall an amazing progressive Christian metal album

Track list:
1. Face Of The Prosecutor
2. King Of The Jews
3. In The Day Of The Sentinel
4. Wisdom Calls
5. Armageddon
6. O Great City
7. The Chronicle Of The Seven Seals