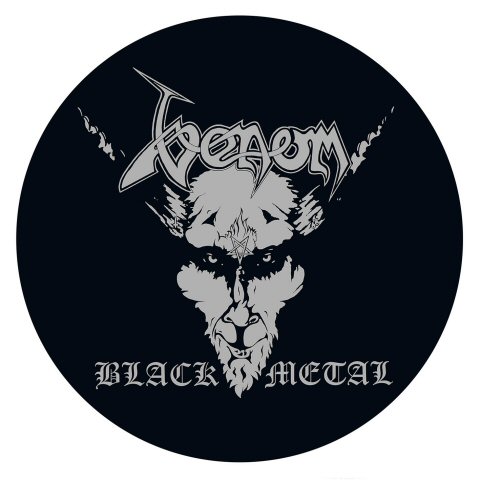 Newcastle natives Venom had exploded across the U.K. in 1981, unleashing one of the most reviled, unapproachable, and, well, toxic debuts in rock history with their landmark Welcome to Hell opus. An unprecedented example of sonic excess applied to the lowest fidelity recording available (or even imaginable), the album wielded its satanic subject matter and uncontrolled speed like a weapon against all that was considered tasteful and refined in music — a true Frankenstein’s Monster, even by heavy metal standards. Needless to say, it was ruthlessly derided and ultimately doomed commercially, but amazingly influential nevertheless, sowing the seeds of much that would be referred to as “extreme metal” in the coming decades. Released hot upon the heels of this first assault came Venom’s nearly as crucial second album, 1982’s Black Metal, whose title alone still lends itself to the most uncompromising strain of heavy metal in existence today. Like Welcome to Hell, Black Metal revealed a trio of visionary village idiots grappling with forces beyond their control (i.e., creative developments so groundbreaking they themselves had little control over its final destination, nor the technical ability to match their vision, more often than not). And yet, that epitomizes Venom’s enduring mystique, carried forward here by another slew of proto-thrashing classics like the title track (introduced by a chainsaw, no less — how subtle), “Raise the Dead,” and “Acid Queen.” Further highlights include the surprisingly complex “Leave Me in Hell,” the unusually goofy “Teacher’s Pet,” and the absolute classics “Bloodlust” and “Countess Bathory.” Also on hand as the LP’s final track is the introduction to the 20-minute epic “At War With Satan,” which would take up their next album’s entire first half in what proved to be a fatefully ill-conceived (and executed) overextension of the band’s capabilities. And while no single track here would match the impact of first album nuggets like “Witching Hour” and “Angel Dust” in terms of future influence (the aforementioned “Countess Bathory” possibly being the sole exception), taken as a whole, Black Metal is right up there with its predecessor