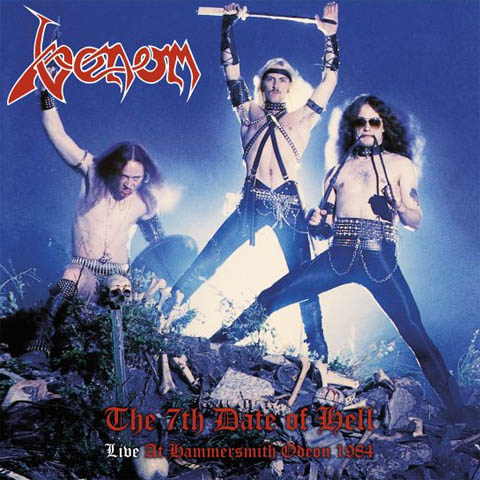 Originally formed in the late 1970s, Venom from Newcastle upon Tyne were also classified as NWOBHM. A fact Cronos (bass, vocals), Abaddon (drums) and Mantas (guitar) always strongly denied. Actually, Venom did not like to be classified whatsoever, whether people called them NWOBHM, Speed Metal, Thrash Metal or anything else. That’s why they invented a whole new subgenre with their second album “Black Metal” in 1982. So single-handedly Venom invented Speed Metal, Thrash Metal, Death Metal, Black Metal – call it whatever you want. Cronos explains: “When Venom wrote songs, it was about changing the chords and changing the speed. The rule book for music had been thrown out of the window. You should start from scratch with music, you should not copy somebody else. Even today, if you dissect some band’s music, you could always say: ‘Well, there is a Black Sabbath riff or there is a Deep Purple riff or there is a fuckin’ Led Zeppelin riff’. You know, because there is only fuckin’ twelve notes. There is only so far you can go. But it’s all about how it comes across. Venom were just determined to create a new kind of noise, a new kind of sound. We deliberately wouldn’t want to sound like anybody else. I would have rather made only one album and people say: ‘That’s shit.’ And then I’d gonna go and get a regular day job. I would rather have done this one totally unique album and then disappear forever than sounding like some other band.” Fortunately, Venom did record more than one album. But this was not down to the support they got from their home country: “People in England did not care about Venom at all. It was the interest from Europe that kept us alive”. It took a long time for Venom from those early gigs in church halls up in the North East of England to reach the biggest stages of the country. But in the end they did. When Cronos, Mantas and Abaddon finally arrived at the Hammersmith Odeon in London on their “Seven Dates Of Hell Tour” on June 1st 1984, even England had caught up with Venom. This magic moment has been captured on this album. So join the legions and enter the very depth of hell!