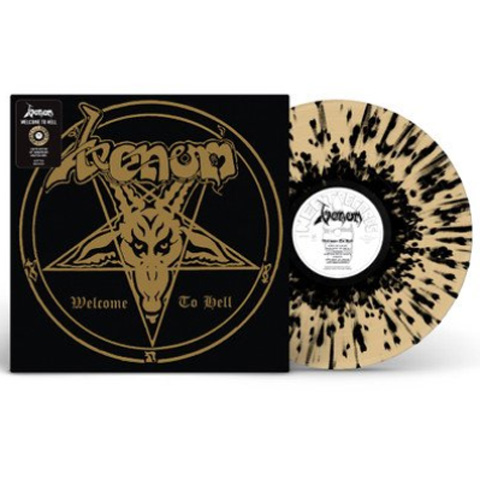 Welcome to Hell, and Venom themselves, for that matter, have long been the subject of heated debate within the heavy metal community. Few bands have been as recognizably influential yet so universally panned by critics during their careers, and, of course, it was this, their first long-player, which ignited most of that controversy in the first place. This shocking debut was the scene of a bloody, head-on collision between Black Sabbath’s original heavy metal commandments and lyrical obsessions with all things demonic, and Motörhead’s unparalleled distortion and breakneck speed. Make no mistake: Welcome to Hell, more than any other album, crystallized the elements of what later became known as thrash, death, black, and virtually every other form of extreme metal, serving as a primer for thousands of post-New Wave of British Heavy Metal teens to follow. Primitive with a capital P, the album’s production values are so poor that fittingly Welcome to Hell truly sounds like it was recorded in a tomb, the band’s Marshall stacks caked with dirt and oozing worms even as they tore through their material like a pack of speed freaks. It’s not that the hellish triumvirate of bassist/growler Cronos, guitarist Mantas, and drummer Abaddon — there, even the ghoulish names set a precedent — were such incompetent musicians individually (OK, maybe Abaddon), but their performance as a unit often sounds clumsy and under rehearsed. All of this only contributes to the album’s gimmick-free honesty, of course, and highlights include such timeless satanic onslaughts as the title track, “In League With Satan,” “One Thousand Days in Sodom” (whose there-and-back riff would later be re-written by Slayer a dozen times), and, most notably, the absolute classic “Witching Hour.” Possibly Venom’s single most important track, in it you’ll hear a number of stylistic devices which would later pervade all extreme metal genres, indeed become their most regularly abused clichés. Additional early singles like “Angel Dust” and “Live Like an Angel (Die Like a Devil)” round out the disc in bombastic fashion, while lesser-known numbers like “Sons of Satan” and “Poison” just plain rock out.