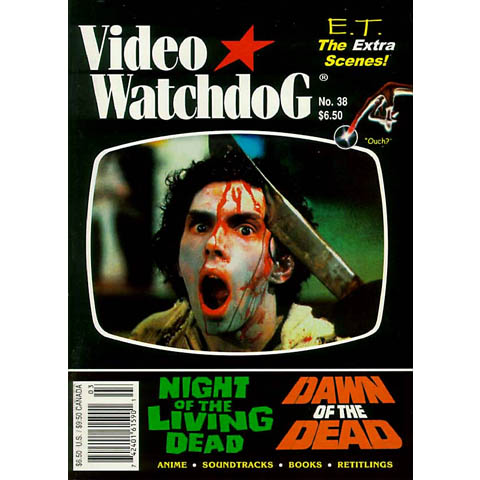 Tim Lucas launched “The Video Watchdog” in October 1985, when it became the first consumer guide to home video releases in the pages of Video Times magazine. Tim’s popular column later continued as a shot-on-video featurette appearing in Michael Nesmith’s 1987 video-magazine-on-videotape Overview and in print, in the pages Gorezone where it came into its own by narrowing (and sharpening) its focus to horror, fantasy and cult cinema! In June 1990, Tim’s column was reborn as its own magazine, subtitled “The Perfectionist’s Guide to Fantastic Video.” It became an immediate hit with the most ardent and obsessive collectors of video arcana. Today, Video Watchdog is still going strong, with an eye-popping, all-color format! The feature articles have sunk their teeth into a wide variety of subjects—everyone from Jess Franco to Jack Hill to Andy Milligan to Krzysztof Kieslowski, movies from Blade Runner to Twin Peaks to Metropolis and the classic horror films of Universal and Hammer. The magazine has also published ground-breaking interviews and become well known for their film criticism. Their reviews are serious without being humorless, academic or overly technical. They delve into matters of letterboxing, missing or restored footage, alternate versions, even how domestic releases compare with overseas editions. Since the founding of the Rondo Hatton Classic Horror Film Awards in 2003, Video Watchdog has been chosen as Best Magazine by the voters for 5 consecutive years. The magazine ran for 183 issues and 2 special edition before becoming just an online magazine. A world of wonders awaits you in Video Watchdog