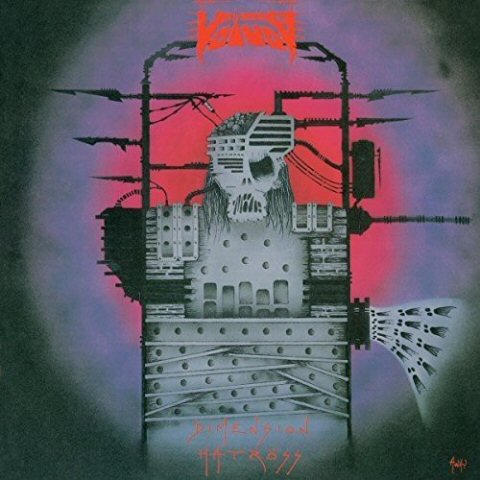 Released nearly two years after the transitional Killing Technology, Dimension Hatröss is the first album where Voivod’s experimental metal is explored from beginning to end. Shedding the clichéd lyrics that the band relied on for their first two releases, they’re thankfully replaced by much more thought-provoking lyrics. The group has also grown as musicians — guitarist Denis d’Amour is one of metal’s finest, the rhythm section of Michel Langevin on drums and Jean-Yves Theriault on bass is tighter than ever, and vocalist Denis Belanger sings more conventionally (no more shrieking). The band’s sudden songwriting maturity becomes evident from the opening track, “Experiment,” when futuristic imagery collides head on with heavy sounds. “Macrosolutions to Megaproblems” contains impressive, busy interplay between the bandmembers, while “Tribal Convictions” is a simpler, Sabbath-like number that opens with some primitive drumming courtesy of Langevin (who also designed the album’s cover). Dimension Hatröss is Voivod’s first fully realized album and sets the stage for their best ever, 1989’s major-label debut, Nothingface.