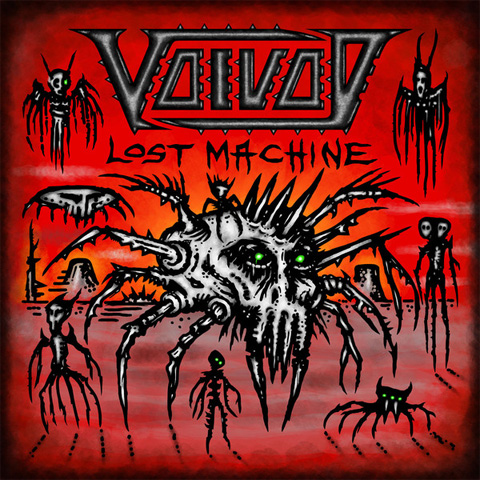 Very few bands survive for four decades. Even fewer are those that continue to reach new creative heights, long after legendary status has been achieved. Voivod were never like other bands: even as the thrash metal scene exploded in the early ’80s, the Jonquiere, Quebec crew stood apart, both as unique visionaries and as proud subverts of the metallic norm. From early prog-thrash classics like Killing Technology and Dimension Hatross through to the psychedelic explorations of The Outer Limits, Voivod have been standard-bearers for individuality and creative freedom for nearly 40 years. Always defiantly out of step with prevailing trends but widely respected as true mavericks, Voivod even weathered the untimely death of talismanic guitarist and songwriter Denis Piggy D’Amour in 2005. Buoyed by the support of their huge global following, surviving original members Denis Snake Belanger (vocals), Michel Away Langevin (drums) and Jean-Yves Blacky Theriault (bass) embarked on a new and challenging chapter in the Voivod story, releasing the much-hailed Target Earth in 2013, with newly installed guitarist Daniel Chewy Mongrain immediately proving himself to be a smart and dexterous successor to D’Amour. By 2014, bassist Dominic Rocky Laroche had replaced Theriault, and a new incarnation of this indestructible band crossed their compositional beams to forge yet more mind-bending, psychedelic post-thrash wizardry. Released in 2018, The Wake was almost universally hailed as the finest Voivod album since the band’s late ’80s heyday. An extraordinary, multi-faceted prog metal colossus, it confirmed that Voivod are currently enjoying a fresh surge of power and passion, even as they approach their 40th anniversary. The band realized that it was a great time to release a live album when they toured for one of the band’s most successful albums yet.