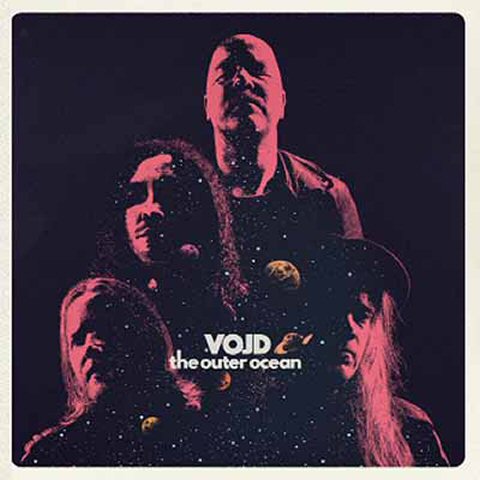 With Goin Under and Shadowline the Swedish band Black Trip had released two classic metal albums to great critical acclaim. When drummer Jonas Wikstrand was replaced by Anders Bentell, the band, now consisting of Joseph Tholl (vocals and bass), Peter Stjärnvind (guitar) and Linus Björklund (guitar), decided to make a fresh start by changing their name to Vojd. The name of Vojd’s first album is The Outer Ocean. There is quite a big difference in sound, style and execution between Vojd and Black Trip. Vojd are much more classic rock than Black Trip ever were, and much less traditional heavy metal… “Yeah, I think you’re right,” says Joseph Tholl. “And I’m glad you say it sounds different from the previous ones, change and development is very important to me. Whether it’s more classic rock, I don’t know, but It’s something different from what we’ve done before. I take inspiration from anything that has good melodies, whether it’s Swedish pop or German thrash metal doesn’t matter. I mostly write songs for acoustic guitar and vocals, from there you can tell if you have a good chorus for example. It all starts with a good tune and then you choose how to present it as a band, in our case hard rock is how we mould it.” “Breakout” is the perfect opener for an album such as The Outer Ocean upbeat, catchy and very memorable. “It was actually written as an opener,” confirms Joseph Tholl, “keeping in mind how we wanted to introduce the album. It’s one of those songs that came very natural, the verse and chorus were just there from the very beginning, without any doubts.” “Dream Machine” is the most unusual song on the record, kind of a very blues-oriented hard rock tune, “I agree, It’s definitely the most different song on the album,” states Joseph Tholl. “I like it a lot, it adds dynamics to the record and almost works like some kind of intermission with its mystical blues/jazz vibe.” The Outer Ocean sounds like a pretty mysterious album title. Joseph Tholl explains the deeper meaning behind it: “It’s meant to be a little bit cryptic and open to interpretation. It has to do with eternity and all that is too vast for the mind to conceive. In that way, I guess, you’re not supposed to understand the title. But to somehow explain it, I guess, it’s a little bit of a twist to the cosmic ocean, meaning the universe.”