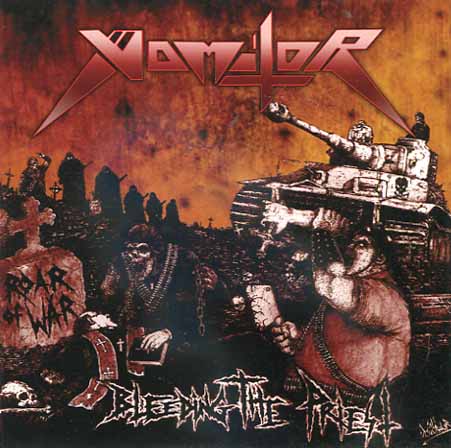 Vomitor is a Gospel Of The Horns side project that started in Brisbane, Australia in 1999. After a bunch of demo tapes the band finally released their debut album Bleeding The Priest in 2002. This album is some really decent piece of Aussie thrash with elements of death metal. But mostly they remain well into the Sodom, Celtic Frost, Hellhammer vein of things, which suits them fine. Vomitor have tried to reinvent the music of the old school gods to something new. They are thrashing like Sodom and friends, but at the same time you can hear the black metal influence of Bathory and Venom on them too. The vocals are dismal and reverberate through out the album. The bass line is ultra fuzzy, the guitar is thin sounding, and the drums are actually quiet decent. I know, I am surprised too, for bands like this are known for their shitty drumming, but this guy can not only keep a beat, he can make the old double time seem interesting. Vomitor have changed it alittle but still stayed true to the roots. Other wannabe bands take a good note, this is how it is done.