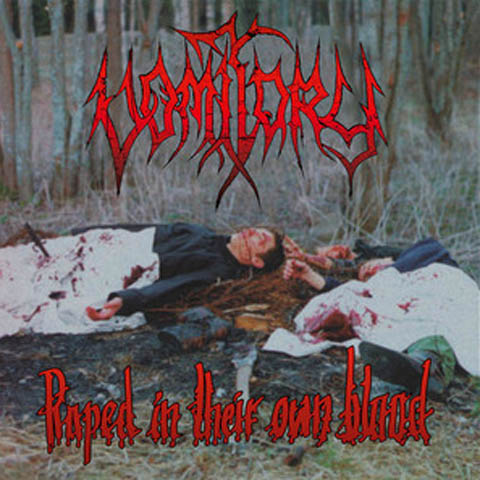 Vomitory ‎–Raped In Their Own Blood lp

2019 reissue on black vinyl with poster.

1996 Raped In Their Own Blood is the very first album by Vomitory after 7 years form the creation of the band. It took a long time but finally these true death metal beasts succeeded in releasing something that could have a wider distribution. This album, if compared to the recent efforts by this band, shows a little less impulsive paces but the same anger and will to destroy. The production too is not the pounding one we will find on Redemption album and everything sounded more bound to the underground, with pure sounds and the classic Repulsion influenced production. This album begins with the long Nervegasclouds that almost immediately shows ultra heavy riffs and quite slow tempo parts. The structures are dynamic and those incredibly destructive crust/grind influenced riffs are always perfectly melted down with the classic tremolo. The vocals are low-pitched and really brutal, fitting perfectly for the mood of this track. The title-track and Dark Grey Epoch are faster with an excellent bass drums work and some up tempo sections that often caress the blast beats style. This last song, especially, displays a few black metal style riffs and some parts could actually fit in a black release because the tremolo riffing is far more present, but without forgetting the sheer impact of the death metal elements. Pure Death is heavily influenced by what the end of the 80s was able to create thanks to the combination of early grindcore with the heaviness of the death metal. Here we have massive up tempo sections that come through doomy ones to give the right impact and make us headbang without rest. Through Sepulchral Shadows begins quite fast with, again, a few influences from black for the riffage but the classic Vomitory slow sections let all the grooving power come out, filling the air with that gore touch. Inferno is one of the most inspired and violent tracks of the whole album, and its greatness comes especially with the main riffs on tremolo, without forgetting the screamed refrain and the rotten bass break. Sad Fog Over Sinister Runes again privileges the up tempo for the faster sections and this is the main difference from the following albums. The speed is never excessive and the blast beats are not overused. The up tempo is even better for some parts because it supports that gore touch and it doesn’t erase it. The blast beats are mainly for the tremolos and this is better. Into Winter Through Sorrow and its hyper crunchy riffs in pure old school grind style soon invade the album but Perdition is not that different, being short and far more impulsive thanks to a heavier employ of the blast beats. The last Thorn is different because it points on the dark, slow progression for the first part but, as we go on, we can meet again fast parts and the classic crust/death metal riffs to end in a good way this very good opus. Raped in Their Own Blood is a very good, first sign by a young band with an already enviable power. This album is recommended especially if you are looking for a bit less impulsive and more old-fashioned Vomitory but, in general, if you love death metal this cannot be overlooked.