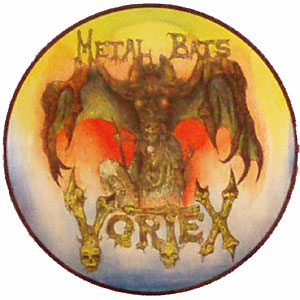 Vortex, hailing from Groningen, date to 1979. The band became well known in their home country by way of the albums ‘Metal Bats’ in 1985 and ‘Open The Gate’ in 1986. The group folded during 1990, but made a return in 1992. World-famous in the Netherlands, completely unknown outside of it: that’s the band Vortex in a nutshell. The band has gained a cult following in the last couple of years something that lead up to the reunion. This 1985 EP is unmistakably eighties: lots of galloping riffs, exciting drums, horror-lyrics, lengthy solo’s and schizophrenic vocals courtesy of madman Jurjen Tichelaar. This re-issue picture disc proves that eighties heavy metal just cannot be beaten, no matter how old it gets. Because despite their age, songs like Gotta Get Away and With Witches Help still rock. Sure, the production isn’t mind blowing and this kind of music hasn’t been extreme for at least fifteen years. Yet I dare say that this re-issue still has the potential to appeal to today’s audience, young and old.