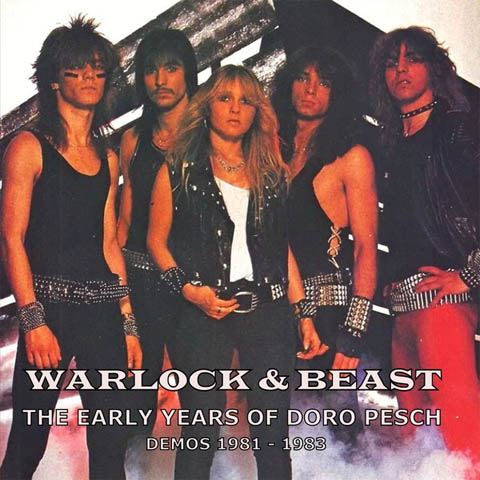 Formed by guitarists Rudy Graf and Peter Szigeti, bassist Frank Rittel, and drummer Michael “Micha” Eurich who later found a singer in former model, Doro Pesch, and convinced her to leave the band, Snakebite. The band members including Doro recorded seven songs back in 1981 under the name Beast before adapting the new band name of Warlock. The group was heavily influenced by such fellow European metal outfits as Iron Maiden, Judas Priest, and Accept, both musically and with their lyric/subject matter. Warlock played live all over Germany in 1983, gathering fan support, and then recorded a demo in late 1983, which got them signed to Mausoleum Records. This album features the Beast demo and the 1983 demo and for any Warlock or Doro fan its a must as only one of the tracks, Burning The Witches, would be re-recorded for their debut album, Burning The Witches, released by Mausoleum Records in 1984. Three more albums would follow; 1985’s Hellbound, 1986’s True As Steel and 1987’s Triumph And Agony. After that and after many, many line-up changes, keeping only Doro Pesch as a constant, legal troubles with one former member or another led the intended fifth Warlock album, Force Majeure, to be released under the Doro name. Since then, she has continued a solo career.