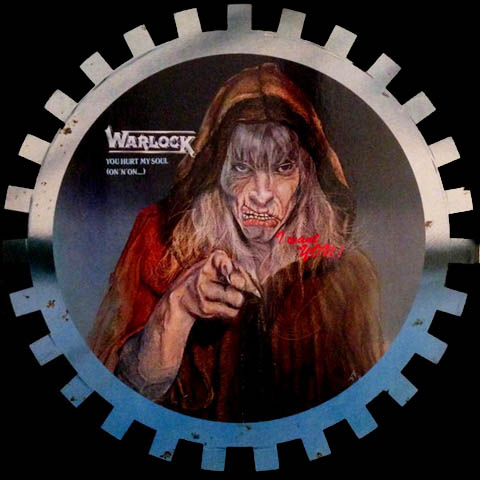 Warlock -You Hurt My Soul cd

This is the first time ever that the 1986 EP You Hurt My Soul has been available on cd. This comes with an 8 page booklet including lyrics and photos. This expanded version also includes a live recording from the bansd famous Monsters Of Rock appearances back in 1986. Warlock, led by former model Doro Pesch, enjoyed a fair amount of success in Europe during their career, as they churned out a brand of metal that was quite similar in style and substance to that of Iron Maiden (galloping rhythms, histrionic vocals, etc.). Doro Pesch was the first woman to front a band at the Monsters of Rock festival at Castle Donington, England, where Warlock played on the same stage of Motörhead, Def Leppard, Ozzy Osbourne and Scorpions. Warlock opened also the Monsters of Rock festival at the Maimarktgegelände Eisstadion in Mannheim, West Germany, with a roster similar to the British show and the addition of McAuley Schenker Group and Bon Jovi. The Monsters Of Rock show would be lthe most important show of their career, even though they werent aware of that at the time. Doro said in an 2012 interview, “It was the best day of my life. It opened up all the door for us and actually we did pretty good. It felt like it were 100 000 people were into it. I was walking up the stairs and it was huge stage, huge PA and i almost couldnt make it. My knees felt like pudding. It was so unbelievable”. A short time after the show Doro got a call from her manager at the time who asked “Are you ready to quit your job” and Doro asked “Why”. “Well you got a change to go out on tour with your favourite band, Judas Priest”. So Doro quit her job as a graphic designer and took a chance to devote here life to music and the rest is metal history.