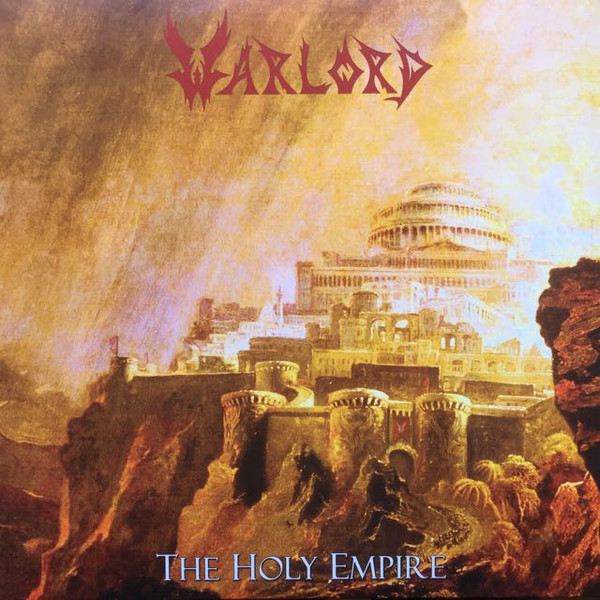 11 years after Rising Out Of The Ashes the band that defined Dark Epic Power Metal, returns with their fourth full length album. composer/guitarist William J Tsamis (Destroyer) and drummer Mark S Zonder (Thunder Child) reunite with one of the original Damien Kings, vocalist Richard M Anderson (Damien King III) to produce this 55 minute epic. With the addition of master bass player Philip Bynoe (Steve Vai) and featuring a guest performance by Giles Lavery on Kill Zone (Dragonsclaw), The Holy Empire pushes the boundaries on the definition of metal, creating a classic for the ages. A new Warlord album is a rare, monumental event and when I learned of this release, I was stoked beyond words and instantly held the loftiest of all possible expectations. Why? In my estimation, William J. Tsamis is an absolutely remarkable guitar player and one of the most uniquely innovative players that the music world has ever seen – yes, EVER seen. The construct of a Tsamis riff is immediately complex but underscored and punctuated with captivating, mournful melody that is compelling, thoughtful and decisively memorable. In my travels, I have read where this profoundly intriguing band has been described as dark, medieval metal and though that description may comfortably fit on a superficial level, the Warlord sound fundamentally transcends such a one dimensional label. The Holy Empire is a testament to the utter brilliance of the band’s all too abbreviated catalogue and I find it warmly reminiscent of the aforementioned Deliver Us EP, 2002’s mammoth Rising Out of the Ashes comeback album as well as the more subtle sounds of the two Lordian Guard albums (a Tsamis project featuring more overtly Christian lyrics, a most unusual yet perfectly suited female vocalist, and of course, the now patented infectious melody of William J Tsamis). In fact, the track Father first appeared on the second Lordian Guard album, Sinners in the Hands of an Angry God. Start to finish, whether it’s absorbed strata by strata or as an all encompassing whole, The Holy Empire album is the rarest of possible finds – an absolutely majestic masterpiece that is astonishingly graceful for a heavy rock album and thought-provoking in its academic lyrical approach (revealing a stunning level of truly uncommon musicianship in the process). Mark Zonder, long time drummer for Warlord innovatively collaborates with Tsamis to create a musical landscape that beckons me to repeatedly listen so that the wonder of this fabulous music can be assimilated on increasingly substantial levels. The track Kill Zone is my personal favourite and arguably the heaviest track on the album but I find that the directness of the primary riff is brilliantly adorned with creatively melodic bridges and choruses. Though the 8 songs are homogenous in that the core Warlord personality is omnipresent throughout, each one possesses a unique personality that, from a synergistic perspective, makes the whole somehow greater than the sum of the individual parts. Still, it’s hard not to be spiritually moved by the 11 minute closing epic The Holy Empire with it’s hopeful, inspirational lyrical content yet somber accompanying melody. I am effusive in my praise for this album and this band because no band before or since sounds like this. This is magnificently epic stuff and the band surfaced at a time when hard rock bands like Ratt, Dokken, Great White, Black And Blue etc. were giving hairspray and spandex a bad name. In the midst of the meteoric rise of hair metal, a little known and sadly unseen band called Warlord entirely broke that mold and took heavy music in a completely different (more artistically credible) direction. Tsamis is the brainchild of Warlord yet one wonders if he truly perceives the remarkable talent that he possesses. The Holy Empire is a classic for the ages and a living testament to the fact that a God-given talent of this nature is one that demands to be heard. Warlord, despite having only released 4 official studio albums, has never fully solidified the vocal slot though Damien King I and Damien King II certainly filled it admirably. However, to my ears anyway, Richard M. Anderson is the most well suited they have ever had as he seemingly hits ever note detectable to the human ear fully and with relative ease. Philosophically, intellectually and spiritually speaking, Warlord is absolutely my kind of band – masterful by any other name.