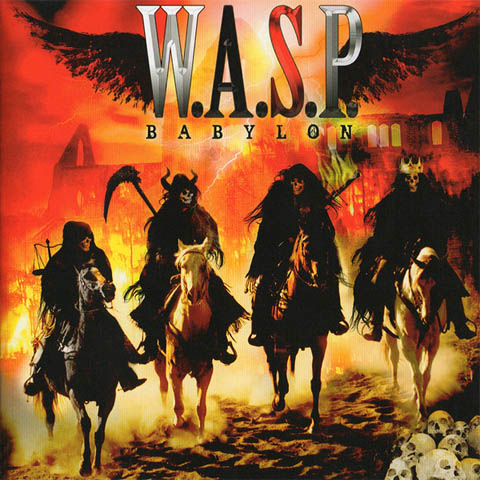 While they started off being marketed as a band, past a certain point, W.A.S.P. became primarily a Blackie Lawless-led project. Which shouldn’t come as much of a surprise, as it was the Lawless one that has written the vast majority of the group’s tunes and has dictated their direction from the get-go. And also past a certain point, W.A.S.P. went from shock-rock poster children for the PMRC (“Animal,” anyone?), and began focusing on conceptual albums and more mature lyrical subject matter. And it’s the latter direction that W.A.S.P. continues with on their 2009 offering, Babylon. Supposedly based on “biblical visions of the Four Horseman of the Apocalypse (as confirmed by the album cover’s doodle), Babylon is still metallic-based, and such tracks as “Live to Die Another Day” and “Babylon’s Burning” are instant W.A.S.P. anthems. Elsewhere, you’ll find a pretty darn dandy cover of the sadly oft-overlooked David Coverdale-era Deep Purple classic “Burn,” and while they’re known first and foremost as headbangers, W.A.S.P. has always had a soft side for power ballads, and “Into the Fire” (not to be confused with the earlier W.A.S.P. ballad, “Sleeping in the Fire”) gets the nod this time ’round. As far as ’80s metallists go, Lawless is one of the few artists from the genre whose songwriting has only improved with age.