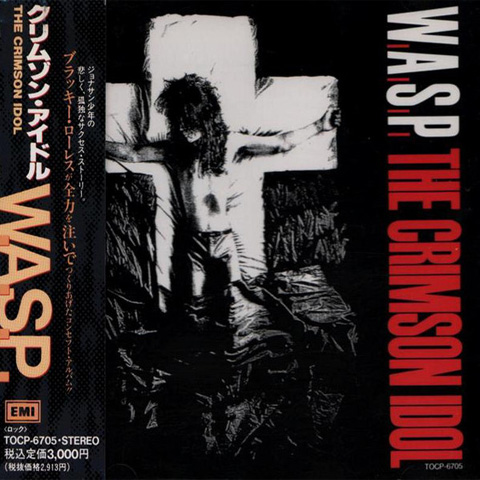 Reduced price due to cd having some marks

Between 1990-1992, little was heard from one of the 1980s’ most theatrical metal bands, W.A.S.P. Many assumed they’d broken up, especially when it became publicly known that the entire band had split from leader Blackie Lawless (the most surprising departure being longtime guitarist Chris Holmes). But the truth of the matter was that Lawless was hard at work the entire time, composing an epic concept album, 1993’s The Crimson Idol, which told the tale of a tormented rock star, Jonathan. Lawless handled rhythm guitar, bass, vocal, and keyboard duties himself, and renowned studio musician Bob Kulick filled in Holmes’ vacated position, while a pair of drummers were used (including the drummer on The Headless Children, Frankie Banali). The songs weren’t a radical departure stylistically for W.A.S.P., and since no original members were left, The Crimson Idol is essentially a Blackie Lawless solo album. The over 74-minute album contained such hard-hitting highlights as “The Invisible Boy,” “Chainsaw Charlie (Murders in the New Morgue),” and “I Am One.” Unfortunately, The Crimson Idol sunk from sight upon release (keep in mind, this was the era of “grunge”) but are nowadays among their best selling albums.

Track listing:
1. The Titanic Overture
2. The Invisible Boy
3. Arena Of Pleasure
4. Chainsaw Charlie (Murders In The New Morgue)
5. The Gypsy Meets The Boy
6. Doctor Rockter
7. I Am One
8. The Idol
9. Hold On To My Heart
10. The Great Misconceptions Of Me