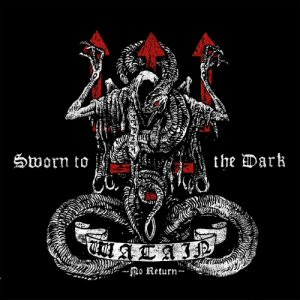 Watain has taken the throne from Dissection. With an enriched professional production and more variation in the song material, this album is surely a forceful candidate for true universal acclaim. Like the hellish buzzing of the demon Beelzebub himself, Watain’s guitars swarm violently into one’s skull on epic opener Legions of the Black Light — only to gradually unveil unexpectedly rich layers of harmonic depth as the song develops. It’s all about the hooks, really, and for those who can’t imagine deeply occult-laced black metal possibly offering great, catchy (meat) hooks — behold thy proof, as irrefutable tracks like Satan’s Hunger, Stellarvore, the title cut, and the simply colossal Storm of the Antichrist effortlessly achieve a perfect balance between Venom or Darkthrone’s outright savagery and straightforward execution, and Emperor’s spiralling arrangements and progressive orientation. What’s more, Watain frequently reveal a greater appreciation for different forms of heavy metal, far beyond black metal’s often tiresomely stubborn f*ck everyone else mindset. Clues to this refreshing outlook include the lightning-fast, thrash-like speed-picking of Underneath the Cenotaph, the magnificently dense, almost Opeth-like riffs introducing The Serpent’s Chalice and the Iron Maiden-quoting bassline closing out The Light That Burns The Sun. They even fare just fine with a pair of tenebrous atmospheric interludes, the likes of which indulgent Scandinavian musicians all too often force into their albums unnecessarily (maybe it’s for the benefit of Mom and Dad, who paid for all those classical music lessons, alas, in vain). Which is why you’ll definitely find more extreme, misanthropic, or adventurous black metal albums than Sworn to the Dark out there, but you’ll be hard-pressed to find one more balanced or — and this may sound contradictory for nasty old black metal — enjoyable.

Track listing:
1. Legions Of The Black Light
2. Satan’s Hunger
3. Withershins
4. Storm Of The Antichrist
5. The Light That Burns The Sun
6. Sworn To The Dark
7. Underneath The Cenotaph
8. The Serpent’s Chalice
9. Darkness And Death
10. Dead But Dreaming
11. Stellarvore