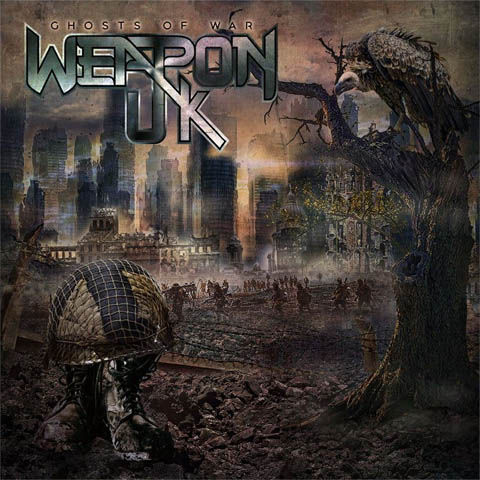 Due to the epoch in their founding time, Weapon UK will forever be considered as a NWoBHM group. And of course, there is the British 80s lifeblood in them, which flares up in rock / metal and drives the listener to ecstasy. Weapon was originally formed in 1980 as Fast Relief, before they caused a furor as Weapon in the underground. Despite critical acclaim, and a major UK tour supporting Motörhead, the band never got a chance to establish itself through a variety of managerial problems and broke up after a couple of years. Fast forward to 2005 and the original line-up reformed for a very successful appearance at Headbangers-Open-Air. In 2010 Danny and Jeff decided to reform the band full time. Their first real album Rising From The Ashes was released in 2014, almost as a comeback album! This was preceded by a renaming of Weapon to Weapon UK for legal reasons. The two original members – Vocalist Danny Hynes and Guitarist Jeff Summer, along with the new rhythm section of Tony Forsythe (Bass/Vocals), and Darren Lee (Drums) then followed it up with the album Ghosts Of War in September of 2019. The album contains ten new compositions and wow, this side got a real heavy weight. In the style of Saxon and Demon, Weapon UK brings every traditional metal / rocker heart to a higher frequency. On the title track Ghosts Of War the band have a guest vocalist, the beautiful Irish girl Clare Cunningham (ex-Thundermother).