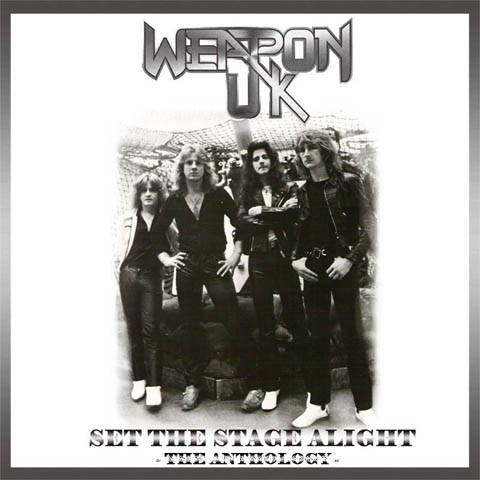 Set The Stage Alight must be considered one of the biggest hymns of the entire New Wave Of British Heavy Metal period. Just ask a certain Lars Ulrich (more of that a bit later). Set The Stage Alight originally appeared on the B-Side of Weapon’s debut single It’s A Mad Mad World (issued in 1980). The original classic line-up of Weapon consisted of Bruce Bisland (drums), Jeff Summers (guitars), Barry Downes (bass) and Danny Hynes (vocals). The band was initially called Fast Relief but changed its name to Weapon in early 1980. Set The Stage Alight was written in 1979 by Jeff Summers. In addition to that, Liar, It’s A Mad Mad World and One Night Stand were three of the earliest songs the group had written together. The live set at the time consisted of around twelve original compositions. People have for a long time been baffled by the astonishing similarities between Set The Stage Alight and Metallica’s Hit The Lights, especially regarding the main riff. Has the band ever talked to Lars or James about this? Danny Hynes explains: Anyone who knows the history of Weapon will know that Set The Stage Alight was written by Jeff in 1979, three to four years before Hit The Lights. Metallica actually lifted the whole intro and used it for their song Hit The Lights! We’ve never had the chance to talk to Lars or James about it but I’ve been informed that they used to open their set with Set The Stage Alight in the very early years. Lars later selected the Set The Stage Alight for his famous NWOBHM 79 Revisited« compilation album. Due to management problems, the original incarnation of Weapon split up in mid-1981 before having recorded their long awaited debut album. This release could have been Weapon’s first full-length record. Danny Hynes explains: We would have completed the four demos and put twelve songs on the album. All the finished tracks were recorded between July and August 1980 at The Manor Studios, Oxford (which was also the home of Richard Branson) and Townhouse Studios, Shepherds Bush, London. The demos were recorded at Alvic Studios in West Kensington, London.