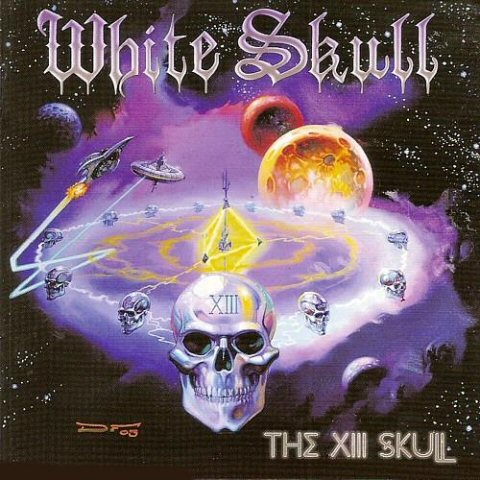 Italian act White Skulls sixth studio album is the second without Federica De Boni on vocals. Symphonic speed metal but it aint Rhapsody or the like that their fellow countrymen are renowned for. It’s more aggressive in the guitar and rhythm section. The band signed to Frontiers records a label that is known more for it’s AOR and hard rock acts than anything truly heavy metal. This is important to mention because I think we can see the label’s influence at work on at least part of this album. Instead of the dark and ominous crunch that the band displayed on previous efforts, now we seem to be visiting new territory for the band that is sadly old for most of us. The rhythm parts, including the leads and backbeat are still heavy, but the choruses and song structure have changed a lot. In fact, I think someone over at the label plugged in a few Stratovarius albums for these guys to mimic. Another questionable angle of this album has also got to be the subject matter. In previous efforts the material was quite the metal cliche’, but still fitting for the band’s overall dark and aggressive sound. Dealing with things like Norse mythology and the Spanish Inquisition. Now however we’re handed more of an ‘X-Files’ or ‘In Search Of’ type of theme, as the albums dozen tracks span the lyrically presented mysteries of everything from extraterrestrial life and the missing link to the the Loch Ness Monster and the clairvoyant visions of Mothman. In the end though its not a bad album there are plenty of enjoyable parts to most of the songs here, it’s just the whole affair seems to miss me a bit. Maybe these guys need to change labels again and get with someone who might better appreciate their heavy style and be less interested in turning them into yet another power metal band, the likes of which we’ve already far too many of!