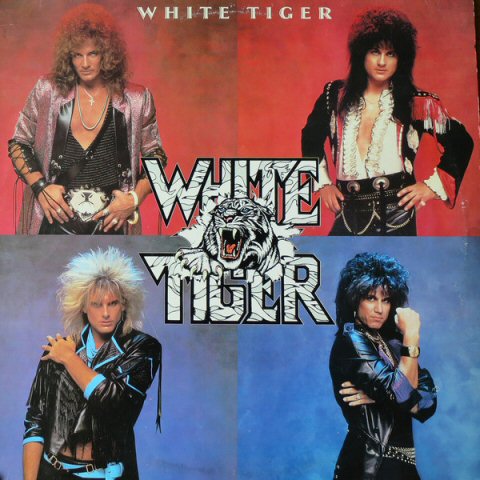 White Tiger was a much touted and short-lived act founded upon the reputations of two key members, vocalist David Donato and guitarist Mark St. John, both of whom had enjoyed brief sojourns in major rock institutions, Donato in Black Sabbath during 1985 and St. John in Kiss. Donato first came to attention in the music business (he had also held down a day job as a male model) in the mid 70’s when he teamed up briefly with the Los Angeles based British group Armageddon following the sudden death of their founder Keith Relf. A further liaison included a stint with Neil Citron’s Hero prior to forging White Tiger with guitar teacher Mark Norton, who would change name to Mark St.John when he got the call to join Kiss. Donato and St. John suffered in different ways. St. John recorded the laudable ‘Animalize’ album with Kiss but stories then flew regarding an alleged rare arthritic disease Reiter’s syndrome that the guitarist had developed in one of his hands on the eve of a European tour, which put paid to his Kiss career. St. John only managed to fulfill a handful of American dates with Kiss before being permanently replaced by Bruce Kulick. Donato meanwhile demoed three Bob Ezrin produced songs (among them a track called No Way Out which was an early version of The Shining) with Black Sabbath and engaged in rehearsals over a period of some six months before being unceremoniously dumped. The singer subsequently recorded further demos fronting up a never realised project by Geezer Butler to be called Geezer Butler Band. White Tiger was reconvened in early 1986 with St. John’s brother Michael Norton being pulled in alongside Silent Rage drummer Brian James Fox. The resulting album (sometimes referred to as ‘Year Of The Tiger’) received praise for its songwriting content but was unanimously criticised for its lame production. White Tiger was not just another hair metal band because this disc actually had a bunch of good tunes. Mark St. John is a very able and humble guitar player, providing good rhythm and short solos (he isn’t so over the top here as on Animalize); Donato, on the other hand, although still in search of his own style, is a talented Robert Plant disciple. Demos for a proposed second album, entitled ‘On The Prowl’, would be recorded but not released at its time. However in March of 1999 the label M.I.L released a compilation album with White Tiger called Raw that features 20 previously unreleased demo recordings. Mark St.John was found dead on the 5h of April 2007 due to a cerebral hemorrhage.