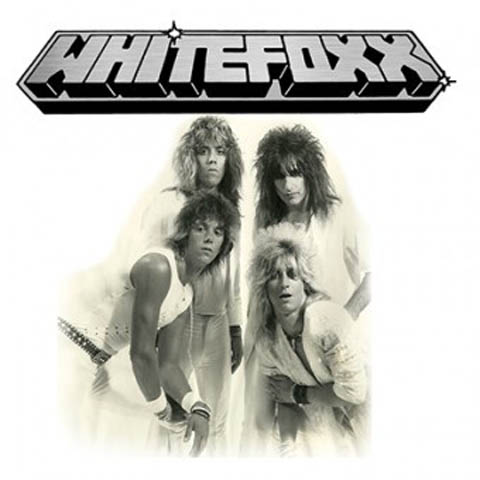 Whitefoxx is known as one of the pioneers in the rise of the Philadelphia Metal scene in the mid 80s. Formed originally as Precious Metal in 1982 as a cover band, the group’s first incarnation comprised of vocalist Tony Harnell, guitarist Barry Bennedetta, keyboard player Mark Soma, bassist Mike Regina and drummer Craig Soma. As the cover scene started to go sour, Harnell quit the band and eventually winded up fronting Norwegian outfit TNT. Bennedetta went on to play briefly in the band Waysted with UFO’s Pete Way. In 1984 vocalist / guitarist Mark Chasen joined Precious Metal and began writing songs with Mike Regina where they traded off lead vocals. They recruited drummer Billy Sipp and in 1985 started playing out as a power trio. As the band gained notoriety in the Philadelphia / South Jersey metal scene, guitarist Jeff LaBar was added to the fold which propelled him into the local spotlight where he was quickly recruited to fill the void left by Michael Kelly Smith with Polygram recording artists, Cinderella. Emaining good friends with Precious Metal, LaBar recommended fellow guitarist Jimmy Maropoulos to take his place. Shortly thereafter, drummer Billy Sipp was replaced with new up and coming skin beater, Jimmy “Feek” Ferraioli. Feek was young, had some monster chops and he brought his own special brand of humor to the band. Soon Precious Metal had to change their name when an all-girl band with the same name landed a major label record deal. This is how Whitefoxx was born. In 1986, with a new name and new attitude, Whitefoxx entered the studio and cut a strong, four song demo with temporary drummer Jim Drnec. This first foray featured the impressive anthem Beverly Hills which gained them attention in Hit Parader magazine in the US as well as Kerrang magazine in the UK. Soon metal shows on local radio stations picked up on this and started playing tracks from the Whitefoxx demo and soon after the band went on to become one of the strongest contenders in the Philadelphia Metal scene. With catchy songs, a flashy stage show and a growing army of followers, it seemed they were destined for stardom! But, as with any group of talented individuals, it’s not always easy to stay on the same page let alone the same stage. Teh band disbanded in 1989 and members went on to Chasen, Light Years and Heavens Edge.