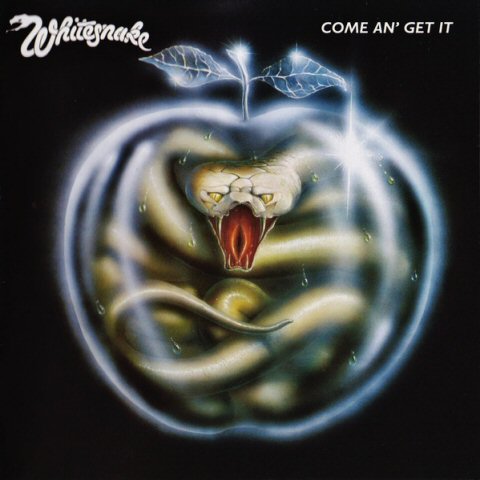 Whitesnake -Come An Get It cd

Despite the massive talents of vocalist David Coverdale and his supporting cast of musicians (not to mention the unimpeachable resumé of producer Martin Birch), Come an’ Get It was another maddeningly average Whitesnake album. A thoroughly boring set that played it too safe and yielded no lasting live favorites, Come an’ Get It was competent to the max — in the hands of a debuting artist, it may have qualified as a classic — but for a near-supergroup of such experience and pedigree, it instead smacked of severe underachievement. Rare highlights include the driving energy of “Hot Stuff,” the lively bar-room piano of “Wine, Women and Song,” and the wistful, acoustic balladry of “Till the Day I Die.” But these share space with run-of-the-mill bluesy rockers like “Don’t Break My Heart Again” and “Would I Lie to You” — all of them hard to fault, but equally impossible to praise. Yawn! Even the quasi-epic “Child of Babylon” fails to live up to initial promise, a half-hearted effort that easily defines the entire record’s abiding sense of indifference. No doubt a reflection of Coverdale’s own fluctuating interest in the group, Come an’ Get It’s confounding mediocrity would thankfully give way to the just as inexplicable brilliance of 1982’s Saints & Sinners and 1984’s Slide It In — a two-towered climax of Whitesnake’s career that displayed a newfound zest in urgency and inspiration.