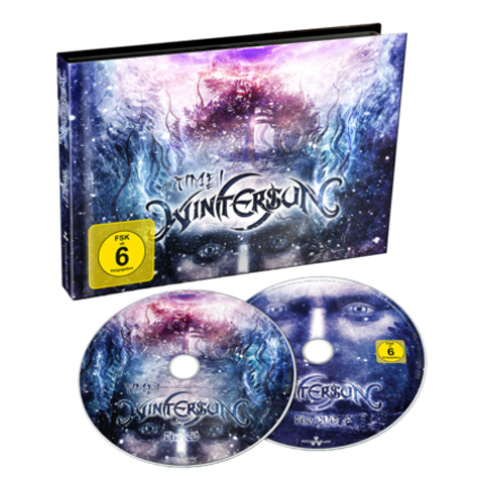 Time I marks the reawakening of Finland’s Wintersun, following eight years of virtual hibernation and all of six since the elusive group allegedly started composing this, its sophomore album, with a second episode slated for completion…when, exactly? Anyway, as tempting as it is to come up with one’s own preposterous Frankenstein heavy metal subgenre to describe Wintersun’s sound, why argue with the very colorful description provided by the band’s chief visionary, Jari Maenpaa (from Ensiferum), himself: ‘Extreme Majestic Technical Epic Melodic Metal’. It fits, and here’s why: first off, instrumental interludes ‘When Time Fades Away’ and ‘Darkness and Frost’ are reminiscent of nothing less ambitious than Mike Oldfield’s Tubular Bells — fair warning of the rampant, unrestrained pomposity awaiting just round the corner. This lurking, hulking hubristic exercise duly arrives with the 14-minute ‘Sons of Winter and Stars’, a four-part suite of horizon-busting polar landscapes crowded to the sensory limit with disorienting rafts of intensely warring guitar and percussive and keyboard flurries, and capped by infinite constellations of similarly contentious black metal-styled screeches, infuriated barks, operatic vibratos, and angelic choirs, trailing in synchronized comets of controlled chaos. Exhale. The ensuing ‘Land of Snow and Sorrow’ is half as long and frantic, but then its quasi-balladic treatment of Maenpaa’s supernatural new age mumbo-jumbo recalls Bathory’s mid-period Viking epics at their simultaneously clumsiest and most majestic. By comparison, Time I’s parting title track splits the difference, both in terms of duration and intensity of attack, ultimately striking the most pleasant balance for Wintersun’s classical/metallic interests, but hardly on a scale that would justify half a decade’s preparation (never mind its oft-saccharine lyrics). Nevertheless, for simpatico listeners willing to dive into Time I’s all-absorbing cinematic prospectus hook, line, and sinker, ‘Extreme Majestic Technical Epic Melodic Metal’ wonders that perplex mere mortals may yet await.

Track list:
1. When Time Fades Away
2. Sons Of Winter And Stars
3. Land Of Snow And Sorrow
4. Darkness And Frost
5. Time