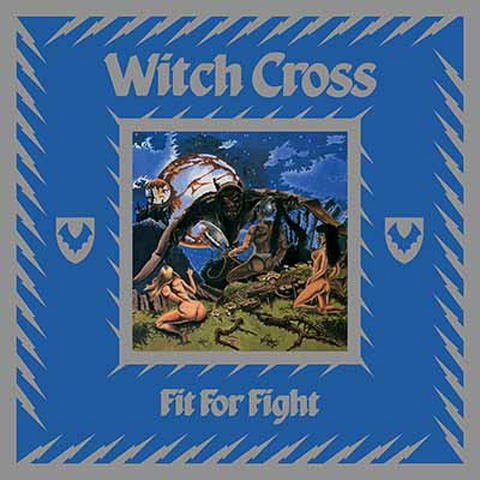 Back in the early 80s, Mercyful Fate may have lorded over the Danish metal scene, but they were not its sole exports. Witch Cross was founded in Copenhagen in 1979 and they released a few demos, a vinyl single and this full-length album before going the way of history, but it was a fairly swanky debut with a good, raw mix to it and the high pitched vocals of Alex Savage, which sound a lot like Tony Moore when he was fronting Riot on the later album Thundersteel. The mix of Fit for Fight was similar to that of Mercyful Fate’s first two records (recorded at the same studio and engineered by Henrik Lund), with the vocals very loud and the band struggling to keep up somewhere below. Fortunately for us, Savage’s vocals were very expressive and catchy, as they bust out the excellent “Night Flight to Tokyo”. “Face of a Clown” is also excellent with its moody synth intro and the ensuing, melodic riffs that are simply unbelievable. If that is not a memorable hook, I don’t know what one is. Most of the guitar progressions aren’t much more than you’re standard NWOBHM fare in structure, but crash along with the crass confidence of demolition derby vehicles. The drums have a shuffling urgency to them, the leads brazen and blazing along like something you’d hear off an old Saxon record, the bass is pumping and the guitars have a great crunch. Other kickass tracks include “Fight the Fire”, “Alien Savage” and the impressive anthem “Light of a Torch” with a very Scorpions setup that exploded into the cruel edge of Diamond Head or Kill ‘Em All. It’s not incredibly deep or unique, but this is an album that actually grows stronger with age, I remember only a brief romance with it which was shelved in favor of Ride the Lightning, Powerslave and Don’t Break the Oath that year, but since that time I’ve broken it out many times over, and “Face of a Clown” is in my estimation one of the very best European tunes of those mid-80s. If you’re digging around for a classic metal record with good songwriting, distinctive vocals and melodies, then Witch Cross is worth a gander. This is not a band to be forgotten and its well worth the money for anyone tracking down some authentic, melodic, feel-good orphan lycanthropy from that crucial age. Singer Alex Nyborg Madsen and Mike Wlad later turned up in Danish act Harlot, who released one album in 1989. Alex also became the singer of Savage Affair.